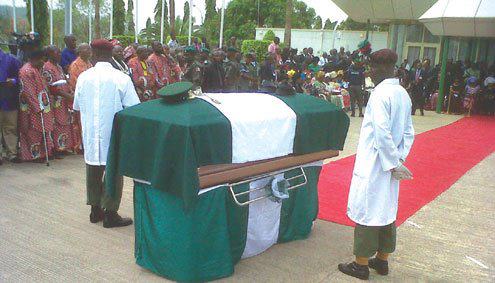 While Ojukwu was celebrated, Theodore Orji was humiliated

Abia State Governor, Theodore Orji, was thoroughly humiliated Tuesday when a section of the crowd that thronged the Enyimba International Stadium, Aba, to witness the lying in state of the late Biafra warlord, Chukwuemeka Odumegwu-Ojukwu, booed him repeatedly and pelted him with satchet water.

It is not clear what angered the crowd about Mr. Orji, who was the host governor at the ceremony. But the Abia State helsman has become very unpopular for sacking public servants from other Igbo-speaking states in the employ of his state, and then ordering them to return to their home states.

Residents also say he has performed poorly as governor with unemployment and poverty soaring in his state, and Aba, the state’s commercial capital, reeking with filth.

A resident of Aba, who withnessed the incident, said when the governor arrived the stadium, he started waving to the crowd. But rather than wave back at him, some people in the crowd responded by throwing satchet water at him.

“Rochas Okorocha was the hero of the day and  my governor should hide his face in shame,” an eyewitness told Premium Times.

“He got the  disgrace of his life today . The Idiot on arrival went to wave to his subjects who he abandoned all this  while but trust Aba people, they responded with sachet water,”  our source added.

But the governor’s ordeal did not end there. NAN reports that the colourful ceremony was almost marred when a section of the crowd booed him as he presented his speech, and chanted songs urging Governor Rochas Okorocha of Imo to address the audience.

The pro-Okorocha slogans, which repeatedly interrupted the Abia governor’s speech, brought the event to an abrupt end.

Terribly humiliated, Mr. Orji however explained that it was agreed by the South-East Governors’ Forum “that only the host governor will speak during the lying-in-state ceremonies.”

The Aba ceremony is a continuation of the celebration of the life and times of Mr. Odumegwu-Ojukwu.

The News Agency of Nigeria (NAN) reports that the people took their turn to pay tributes to Ojukwu and were also unanimous in saying that his death had brought a leadership vacuum in Igboland.

In his speech, Mr. Orji described the former Biafran warlord as a foremost “detribalised Nigerian and a visionary leader.

“Ojukwu was a detribalised Nigerian, who was born in the North, studied and lived in the West and domiciled in the South and is of South Eastern parents,’’ he said.

He further described him as a charismatic, dedicated and focused leader, who looked beyond his time.

The governor said that the Biafran war, which Mr. Ojukwu led, “opened our eyes to the need for a united Nigeria.”

Sen. Ike Nwachukwu, a retired General in the Nigerian Army, who served under Mr. Ojukwu in the 5th Infant Battalion, also spoke glowingly about his leadership qualities as his Commanding Officer.

Mr. Nwachukwu said that Mr. Ojukwu imparted positive leadership virtues in them, describing him as “a great man and one of the best dedicated soldiers the Nigerian Army has produced.”

Sen. Uche Chukwumerije remarked that Mr. Ojukwu’s lying-in-state in Aba was in respect of his wish, noting that the city was remarkably dear to his heart while he was alive.

Mr. Chukwumerije, who is the Vice Chairman of the Local Organising Committee (LOC) for the event in Abia, said: “Aba is a place very dear to Ojukwu’s heart.’’

“Throughout Ojukwu’s lifetime, he cherished Aba because it is a projection of Enyimba spirit of vibrancy, courage, patriotism and selflessness.’’

Joshua Ogbonnaya, a professor, who is the LOC Chairman, described the choice of Aba as “apt” because it was the first place Ojukwu worked shortly after he returned from London.

Emma Adaelu, the chairman of the ceremony and an Aba-based industrialist, expressed happiness that Aba was one of the cities selected for Ojukwu’s lying-in-state, in line with his request.

Adaelu remarked that Aba played a strategic role in Ojukwu’s life, pointing out that “he received overwhelming support from the city and its people.’’

He described Ojukwu’s demise as a monumental loss to Ndigbo, saying that “he stood for the ideals and liberation of his people.

“Only God can replace this rare gem for Ndigbo,” he said.

NAN reports that Ojukwu’s wife, Bianca, was accompanied to the ceremony by the wives of Abia and Imo governors.

Governor Peter Obi of Anambra and the National Chairman of All Progressive Grand Alliance, Victor Umeh, were among eminent dignitaries at the ceremony.

There was also heavy presence of security operatives at strategic locations of the city and the stadium, while men of the Federal Road Safety Commission were seen controlling traffic in the town.

This is what FEC will discuss Wednesday