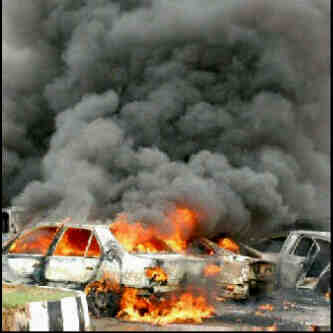 Pupils of Gomari Costain Primary School in Maiduguri woke up on Tuesday to discover that their school has been destroyed by fire.

The school was razed by an overnight fire, believed to have been made by persons suspected to be members of the Boko Haram sect.

Some teachers of the school told newsmen that a group of persons, mainly teenagers, drove away the security guard in the night before setting the school ablaze.

One of the teachers, who lives near the school premises, said “we heard a loud noise in the school at night and we thought it was a minor thing but when we reported for duty in the morning we discovered that fire had burnt the school. When we asked the security guard on duty he told us what happened.”

Samuel Tizhe, the Police Public Relations Officer in the state, confirmed the incident.

“We have started investigation but no arrest made yet,” he said.

On Monday, a section of the Maiduguri Experimental School, Kwanar Yobe, was burnt by unknown persons.