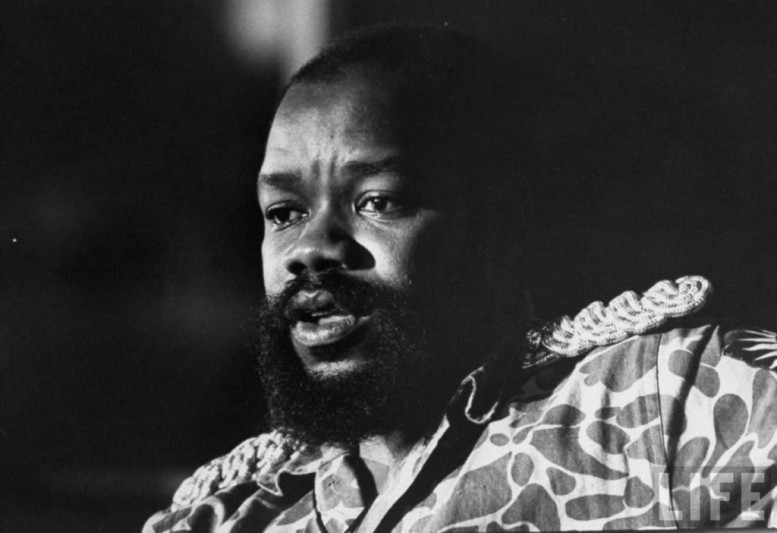 The remains of former rebel leader and icon of the Igbo people, Chukwuemeka Odumegwu Ojukwu, arrived Abuja early on Monday from London aboard a British Airways flight. This marks the beginning of the late icon’s final journey to be culminated on Friday, March 2, when he will be buried in his hometown in Nnewi, Anambra State.

The elaborate funeral procession is expected to touch through major cities in the South-Eastern states of Nigeria. Mr. Ojukwu, who is better known as the leader of the secession plan which led to the Nigerian Civil War from 1967 to 1970, died in the United Kingdom on November 26, 2011.

The late rebel leader’s corpse left Abuja later in the day via a chattered flight to Owerri.  The corpse was accompanied by his wife, Bianca, and his first son, Emeka Jnr. The younger Mr. Ojukwu resigned from the administration of Governor Peter Obi of Anambra last August citing irreconcilable differences with the administration which he accused of losing focus and substance.

The funeral procession ended at the Heroes Square in Owerri on Monday where dignitaries and current and retired military chiefs gathered to give their last respect to the late military man who once served as the military governor of the Eastern Region of Nigeria in 1966.

The procession will pick up on Tuesday, February 28, 2012 in Abia state. Governor Theodore Orji has declared the day a public holiday. All government establishments as well as markets are expected to be shut down to honour the late icon. Members of the public in Aba are expected to gather at the stadium. From Abia, the corpse will be escorted to Ebonyi state.

The peak of events will hold on March 1 when the procession will move from Ebonyi to Enugu en route Awka. President Goodluck Jonathan has made a promise to be in enugu to grace the occasion.

The motorcade, which will pass through the Oji River will take a halt at a military camp near the popular river. The camp until recently was home to destitute Biafran soldiers who fought against the Nigerian army during the civil war. Most of them who were relocated to the Oji River camp shortly after the war in 1975, lived there under dire conditions until  the Movement for the Actualization of the Sovereign State of Biafra (MASSOB) relocated them to more decent accommodation in Orlu.

The late Ojukwu’s motorcade is expected to make a 5-minute stop to pay homage to the soldiers who fought for the Biafran cause and to celebrate the ‘Biafran heroes’.

The motorcade is expected to move on to Nnewi where the late icon will be laid to rest in a grand mausoleum on Friday, March 2.

Come out and dialogue with FG, Atiku urges Boko Haram

How Ibori, the thief in Government House, admitted stealing $250million