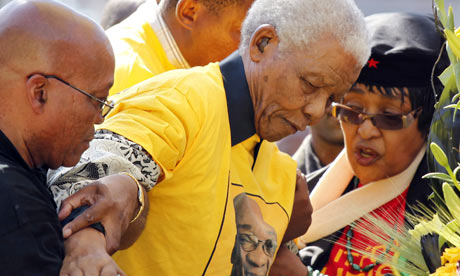 The South African government and his family are keeping former President Nelson Mandela’s hospital location a closely guarded secret so as not to compromise his privacy and that of his family, an official has told Premium Times.

“I can’t give you details of Mr. Mandela’s hospital because of his privacy and that of his family,” Mac Maharaj, spokesman to President Jacob Zuma, told this newspaper when he was asked the exact location of the globally revered anti-apartheid icon.

Mr. Maharaj signed the initial statement announcing that Mr. Mandela had been taken to hospital over a “long-standing  abdominal complaint”.

He deliberately left out the hospital to which the former president was admitted, although the BBC suggested it was a military hospital in the capital, Pretoria.

He told Premium Times Mr. Mandela was now stable after he underwent surgery and that updates  would be provided about his condition later today or tomorrow.

“As soon as we receive further details from the specialist treating him, and we show it to his family and President Zuma, we will issue a statement,” Mr. Maharaj said.

Mr. Mandela is perhaps the world’s most respected living figure. The South African government and the Mandela family fear that hordes of journalists and  concerned fans of the global statesman might besiege his hospital once his location is known.

“We request that all respect the privacy of Madiba and that of his family during this period.”