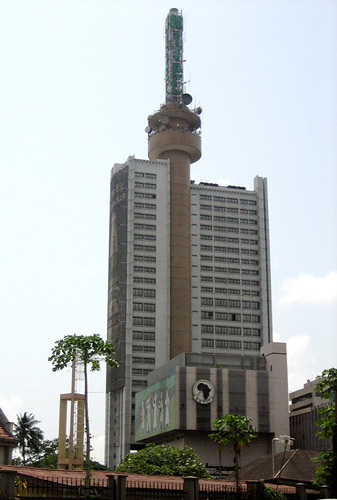 The House of Representatives today said it is worried that the over N250billion debt overhang by the moribund national telecom carrier, the Nigeria Telecommunication Limited (NITEL), might constitute a huge disincentive for prospective investors as well as a burden for eventual buyers.

Chairman, House of Representative Committee on Privatisation and Commercialisation, Bukar Ibrahim, told Vice President Namadi Sambo and other members of the National Council on Privatisation (NCP) that there is every reason to worry about the huge indebtedness of the company considering the burden it is likely to place on the new investor that would take over.

“Basically, in the forefront of things, we have NITEL to worry about”, Mrs. Ibrahim told reporters at the end of the meeting.  “We are all worried about what is going to happen about the huge indebtedness. There is so much debt in NITEL that whoever is going to buy NITEL will have a lot to deal with.

“It is indebted to the tune of about N250 billion. So, we are talking about a lot of money, which does not even include a lot of salaries and wages that have not been paid to staff.”

The House committee also expressed concern over the prevailing situation in Aluminum Smelter Company of Nigeria (ALSCON) in Ikot Abasi in Akwa Ibom state, which is also being bugged down by a huge staff liabilities..

“There are a lot of staff liabilities to be taken care of at ALSCON,” she said. “So, there are so many things that need to be put together, and we have agreed that from time to time we will liaise with the Executive arm, through the NCP, to see how we can make the plant become a success.

Mrs. Ibrahim, who said the committee would not want to go into the politics of the plant’s privatisation, however said there must be a situation of give and take if the process must succeed.

“We are going to consider this with Vice President (Chairman of the NCP) later on after we have been on our oversight visits to these privatised companies.”

“We are in the early planning stages. But I think it will be greater than our annual turnover of about $200million. My estimate is that it would grow by more than three or five time within five years. That is the sort of vision we have.”