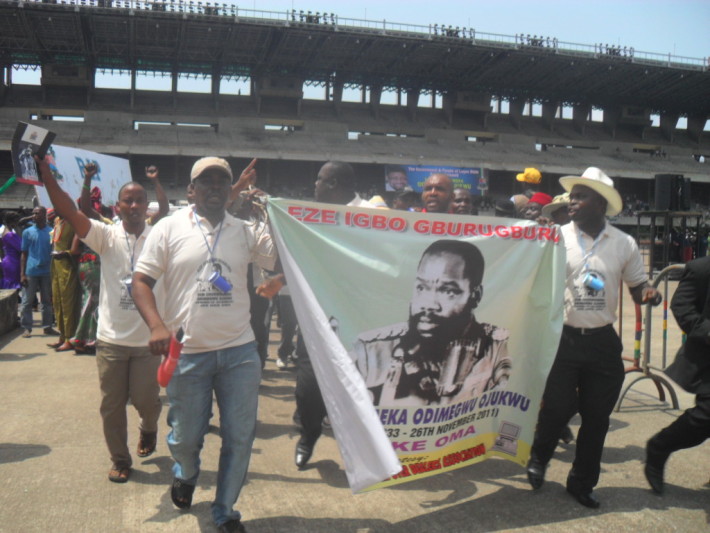 Thousands of Lagosians turned out at the Tafawa Balewa Square, Thursday, to pay their last respect to the late Igbo leader, Chukwuemeka Odumegwu-Ojukwu.

The colourful event, which began about three hours behind schedule, had the late warlord’s colleagues in the army as well as his political compatriots paying their last respect.

“I speak of my commanding officer, Odumegwu-Ojukwu. He was a fine officer, an officer I emulated, whose loyalty you couldn’t doubt,” said Ike Nwachukwu, 72, a former senator and retired army general.

The funeral ceremony, which precedes the arrival of Mr. Odumegwu-Ojukwu’s remains next Monday, began with Lazarus Ekwueme, professor and traditional ruler, leading a choral group for a rendition of the national anthem.

The presentation and breaking of kolanut followed.

There was a military parade in honour of the late Head of State of the defunct Republic of Biafra performed by young cadets from Kings College, his alma mater.

Tunji Braithwaite, the chairman of the occasion, reminisced about his acquaintance with the deceased since age eight.

“The thing I want to say today is to correct some wrong impressions about Emeka (Odumegwu-Ojukwu),” said Dr. Braithwaite.

“Some people said that Emeka declared war against his fatherland. There is nothing farther from the truth.

“Emeka declared war against lies and corruption. Imagine yourself as the patriarch of your home and there are oppressions and injustices, would you surrender?

“I will not surrender,” Dr. Braithwaite said, while also calling for the convening of a national conference to avoid “the fulfilling of some doom apocalyptic prediction of this country.”

Uche Chukwumerije, a senator, while apologizing on behalf of Chukwudifu Oputa, the chairman of the Odumegwu-Ojukwu Burial Committee whom he said was “unavoidably absent because he’s very sick;” described the Lagos ceremony as “homecoming” for the late Odumegwu-Ojukwu’s because it was his “first home.”

“If you look at the life of Ojukwu, from his time in Lagos to his stay in the army…. Ojukwu’s life mirrors the life and bounds of Nigeria,” said Mr. Chukwumerije, the vice chairman of the Burial Committee. 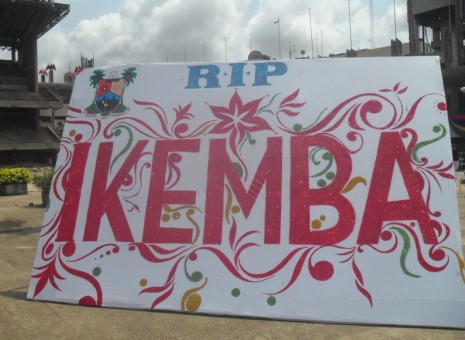 Other notable Nigerians paid tributes to the late Igbo hero who passed away last year at 78.

Bola Tinubu, former Lagos State governor, while emphasizing that the deceased “attended the best schools” said that he “chose the path less travelled.”

Adeyinka Adebayo, a retired army general and former governor, spoke about their first meeting at a cocktail party in Enugu when the deceased was an Assistant District Officer, before Nigeria’s independence. He also explained the various roles played by some notable Nigerians in the army during the 1966 coup and counter-coup.

Pat Utomi, a former presidential aspirant, said he’d rather not praise or celebrate the deceased.

“I stand here to tell the people to send his spirit on an errand,” said Prof. Utomi.

Businessman Sonny Odogwu started talking about the people who fought Mr. Ojukwu during the civil war “Obasanjo inclusive, Adebayo (rtd General) confirmed it…” and then paused and switched to something else.

“The social injustice that we vehemently fought against is still there,” said Mr. Odogwu.

Others who eulogized the late Ojukwu included Paschal Dozie, the founder of Diamond Bank; Victor Umeh, National Chairman of the All Progressives Grand Alliance (APGA); Rochas Okorocha, Imo State governor; and his Anambra State counterpart, Peter Obi, amongst others.

Also, speaking to Premium Times before the ceremony began, Emeka Anyaoku said “it will take a little while before another Igbo leader emerges.”

“His passing has left a great void in, not only the leadership of Ndigbo, but also in the national political leadership of the country,” said Mr. Anyaoku, a former Commonwealth Secretary-General.

In his remarks, Debe Odumegwu-Ojukwu while saying that his late father represented “a love for all” as could be testified by the notable ethnic and religious leaders who graced the ceremony; added that another leader would rise to take his place.

“They should try and rule the country without injustice so that Biafra will not rise again. But if such a situation arises, somebody will fit into his shoes,” said Debe Odumegwu-Ojukwu, the deceased’s first son.

The ceremony also witnessed some talking points with Mr. Odogwu, perhaps, providing the most unusual moment when he suddenly dropped his microphone in the middle of his speech.

He later complained that the microphone almost electrocuted him.

“The microphone shocked me and I nearly fell down but Ikemba’s spirit said I’ll never fall down,” said Mr. Odogwu, who was flanked by Emeka Odumegwu-Ojukwu (Jnr), the second son of the late Igbo leader.

The duo later left in the middle of the ceremony.

Various Igbo traders’ groups, Igbo groups, and non-Igbo groups did a lap honour to pay tribute to the late warlord.

Some Muslim leaders and clerics, led by Jubril Mogaji, the Etsu Nupe of Lagos, embarked on a prayer in the middle of the ceremony after “they’ve been moved to pray.”

Mr. Okorocha, who received a rapturous reception from the crowd, said that the presence of Mr. Tinubu and other eminent Yoruba leaders “has rekindled the friendship between the Igbos and the South West.”

Mr. Obi, who gave his speech in Igbo language, paid glowing tributes to the late Ojukwu, the Igbos, and “the Igbo spirit.”

Babatunde Fashola, the Lagos State governor, said he had a lot to tell the next generation about Mr. Odumegwu-Ojukwu.

“As I considered a befitting tribute, many things flashed through my mind.

“What lessons did we learn from the war?

“What would Ikemba (Ojukwu’s title) have wished if he were alive – a broken Nigeria or a stronger united Nigeria?” Asked Mr. Fashola, who is the chief guest of honour.

While delivering an emotionally charged tribute, Mr. Fashola said that his childhood memories of the civil war, when he was barely four, had made him say “never again to war in Nigeria.”

“Here goes a great man; from where , just where, will another one come?”