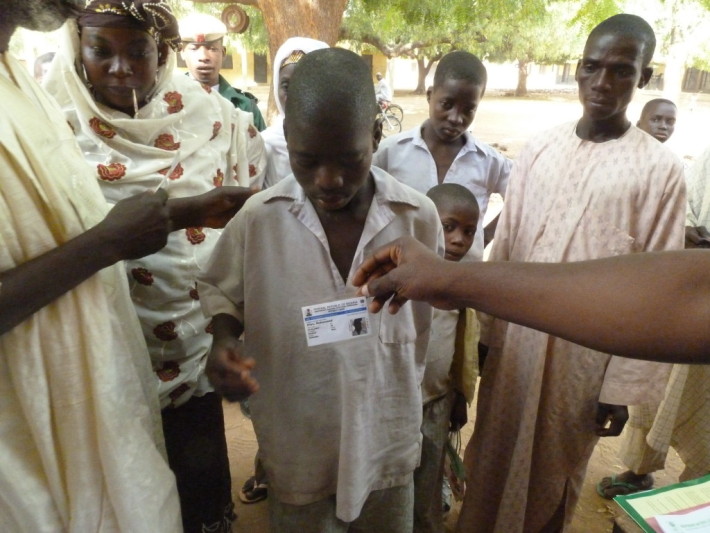 The police fail to check irregularities during the election

The video in question  (see below)shows the security operatives allowing underage voters to queue with adults while waiting to be accredited and subsequently vote. And while in the presence of election observers, several minors proudly brandished their voter’s cards, which were received by INEC officials, including a National Youth Service Corps member who was the presiding officer at the polling unit.

“What I observed is appalling,” said Chinedu Nwagu of the CLEEN Foundation, a non-governmental organisation primarily concerned with the conduct of security operatives on election duty. “This malpractice can only occur because the security operatives by their immoral conduct allowed it.”

A review of several other polling stations across the state’s 23 local governments as monitored by other observers with the CLEEN Foundation revealed very poor security presence at polling stations outside the Sokoto State capital.

In Shiyar Sarki polling station of Bodinga Local Government Area, Abdulaziz Labbo, stated that the two security officials posted to the polling station were “somewhat impartial” in the discharge of their duties; with the police officer using “unnecessary force” on people during the election.

“The officers are somewhat impartial because they don’t care about identifying those who did multiple voting,” said Labbo, who noted how a jeep conveying a mobile police officer and a politician came to the polling unit, took a voter away and returned him two hours later.

A report filed by another observer described the security presence at Kilgori Model Primary School Polling Station in Yabo Local government as “not adequate at all”. The only police officer present during accreditation did not have any identification on his uniform. Described as “not approachable at all”, the report stated he just sat under a tree while the polling centre was “not orderly at all” with people doing as they like.

“Election is very poor because security men are not performing their duty,” stated the report, which mentioned that army personnel brutalised some people and how a team of policemen drafted to supervise voting at the polling unit compromised their duties. “[The Police] C.I.D team held discussion with one PDP official. He gave them money after casting vote.”

Another observer, Sanusi Abdullahi, reported that the only Police officer at Gari Yabo Polling Unit in Dange Shuni Local Government left the polling station for an extended period of time, which made voters feel unsafe and insecure around party agents. He rated the overall conduct of the police officer as “very poor” not deserving any recommendation.

“In the morning, there is no officer. That is why they are facing some major problem,” Abdullahi said. “People that come to vote are disturbing, shouting and speaking to the presiding officer and other workers anyhow.”

The observers however commended the conduct of some Police personnel. Abdulaziz Labbo noted how at Shiyar Hausawa polling station in Bodinga LG, the only two police officers present controlled a situation involving a group of people insisting that their colleague, though not registered and not having a voter’s card, must vote.

In Tarawa polling unit under Kware Local Government, Zayyanu Balarabe observed that the three operatives from the police, the civil defence, and road safety were “good, impartial and orderly” during the elections; and commended them for handling the security threat at the polling unit when a fight broke out between opposing party members.

Other places where the Police and other security officials were commended for good behaviour include Wakaso Polling Unit and Dogon Fili Polling Unit both in Kware LG, Mallamawa Polling Unit in Wurno LG, amonst the few others.

“There was commendable security presence around the state capital and along the major roads in the state,” Nwagu noted while presenting CLEEN Foundation’s preliminary statement on the conduct of security officials to members of the press. “But there was generally poor security presence at polling units outside the metropolis. While some polling stations had at least two or more security officials, some others had one, while some had none at all.”

Prior to the election, which was overwhelmingly won by the candidate of the People’s Democratic Party, Aliyu Wamakko, who polled 518,247 votes of the total 728,108 votes cast, the Nigeria Police had said they drafted over 8,000 personnel for the election.

The manager of CLEEN Foundation’s Accountability and Justice Sector added that with crowd control remaining a challenge for security operatives, the presence and activities of political thugs, popularly known as “area boys” posed serious challenges for security at the various polling units.

“At Binde Bakin Titi 002 polling unit in Dange Shuni LGA, there was only one security personnel when about 15 of these thugs arrived on eight motorcycles and tried to disorganize the voting process by intimidating voters to support a particular political party,” Nwagu said. “It took strong resistance by the voters, and no intervention by the security official, to drive them away and restore calm to the polling unit.”

CLEEN Foundation in collaboration with the Justice for All (J4A) programme of the UK Government’s Department for International Development (DfID) recommended that the police and other security agencies should be better coordinated, trained, and equipped for future election duties.

Lagos shuts down as Ojukwu lie in state