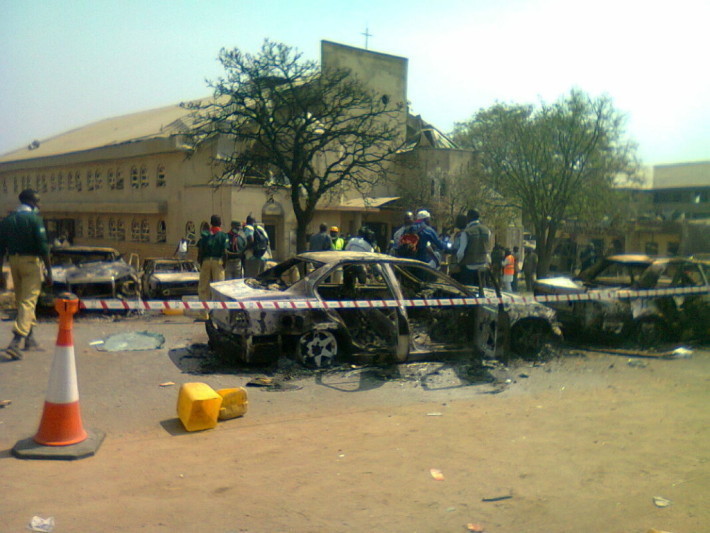 The Nigeria police have identified four suspects in connection with the deadly bombing of St Theresa Church, Madalla, on Christmas Day, high-level operatives familiar with the investigation have told Premium Times.

The suspects are Mutari Kafanchan, Mohammed, Bashar and Suleiman, believed to be members of the extremist Boko Haram sect.

The suspects are however still at large and operatives, who do not appear to have sufficient information to track them down, are said to be on their trail.

Also believed to be remotely connected with the bombing is one Mohammed Aliyu described as a close confidant of the national leader of the sect, Abubakar Shekaw.

The police already have Mr. Aliyu in custody and are counting on the information he provides to track the Madalla bombers as well as Mr. Shekaw down.

Curiously, Kabir Sokoto, who the police claim masterminded the bombing, is conspicuously missing from the list of suspects drawn up by the police.

Police spokesperson, Olusola Amore, could not be reached to comment for this story. Severals calls to his mobile telephone were unanswered.

A day after the bombing, which killed dozens and injured several others, the National Security Adviser, Owoeye Azazi, announced that  two men, suspected to be members of the extremist Boko Haram sect, were arrested in conjunction with the blast.

They were “caught in the act,” Mr. Azazi said at the time.

But nothing has been heard of the suspects ever since.

In his own account of the bombing, Mr. Azazi had said three suspects drove past the church in Madala, throwing a bomb into the church from a moving vehicle in the glare of everyone.

He said two of the men died in the explosion while two of them were arrested. Nothing has been heard of the suspects ever since.

Mr. Azazi didn’t answer or return calls seeking his comments for this report.

On its own the Department of State Security Service,(SSS) last week declared one Habibu Bama wanted in respect of the same attack which claimed the lives of over 40 persons.