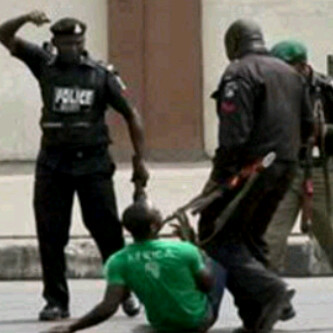 Aderinto was brutally mishandled before he was shot to death

About 45 minutes after the two gentlemen walked into his office, Deputy Commissioner of Police, Abdullahi Yuguda, rose behind his wooden desk at the State Criminal Investigation Department office, Panti, Lagos, and walked the two men – a lawmaker and a local government chairman – to the door.”The case is a serious one and the person involved is a senior police officer,” Mr. Yuguda, dressed in a sparkling white kaftan with a matching cap told his visitors for the umpteenth time.”The case is now undergoing administrative procedure. We have finished our own investigations here and have sent our recommendation to headquarters. The matter is beyond the state,” Mr. Yuguda added.The “senior police officer”, Segun Fabunmi, a Divisional Police Officer (DPO), allegedly shot dead Ademola Aderinto and wounded four others at Ogba, during the last nationwide protest against the removal of fuel subsidy.Oloruntoba Oke, the Ifako-Ijaiye local council boss, and Saka Fafunmi, a member of the Lagos House of Assembly, were at the Deputy Police Commissioner’s office to ascertain the status of the police investigation into the shooting of Mr. Aderinto. They also demanded the release of the deceased’s body for burial.Mr. Yuguda told his visitors “not to pay attention to rumours”, apparently in reference to some media reports claiming that Mr. Fabunmi, the former DPO of Pen Cinema, Agege, gets the privilege of being released from detention, every night, to join his family and then return early the next day.”I’ve been in this job for 32 years and I know that you don’t listen to rumours,” said Mr. Yuguda, a former Divisional Police Officer at Ketu and Badagry.’Trigger happy’A coroner’s inquest into the cause of death of Mr. Aderinto, 27, indicted the police, revealing that the deceased was shot from behind.

The report put to rest the initial claim by the police that the deceased engaged the police officer “in an armed struggle.””Everyone has come to the realization of the fact that the guy who shot him (Mr. Aderinto) was a trigger happy police man who decided to fire not just one but several shots in the midst of people which eventually was what brought Ademola down,” said Mr. Fafunmi, representing Ifako-Ijaiye constituency 1.”The other four were lucky to have escaped…one of them had his fingers chopped off, that’s the least of those who were affected,” Mr. Fafunmi added.While Mr. Aderinto did not live to recount the events of January 9, Abubakar Alimi and Samuel Egbujor did.A bullet narrowly missed Mr. Alimi’s genitals, piercing his right thigh on its way out. Mr. Egbujor’s leg was shattered by another bullet.”That day, we were discussing football at the vendor’s stand at the bus stop when the police patrol van arrived,” recalled Mr. Alimi.”One of the officers started to shoot into the air, but the DPO snatched the gun from him and started to shoot at us.”Mr. Alimi said that he was running towards his house when he felt a sharp pain course all over his body.”I felt down and couldn’t walk again so I crawled into a nearby mosque and hid myself.All the four gunshot victims have been receiving medical treatment bankrolled by the local council boss.Mr. Egbujor said that he could not walk weeks after the incident. At the back of his house at Abeokuta Street, Ogba, Mr. Alimi sat with friends who had come to inquire after his health.A friend joked about the government asking him to make a choice between a private car and a commercial bus as a form of compensation.Everyone laughed.”Last night, I could not sleep despite I took some sleeping tablets. It was only this morning that I managed to sleep,” Mr. Alimi said.In 2002, Mr. Aderinto, the fourth child in a family of five, moved to Lagos after completing his apprenticeship in tailoring in his hometown in Ilesha, Osun State; the same town as Mr. Fabunmi, his alleged killer.”He learnt this tailor work at my father’s place at Ilesha,” said Moses Daramola, a tailor at Ogba.”Then I told him that if he finish learning the work, I’ll bring him to Lagos. And when he finished, I had to bring him,” Mr. Daramola added.Burying the deadWith the conclusion of the coroner’s inquest, the police say they would release Mr. Aderinto’s corpse as soon as possible.”If you bring the request for the release of the body, I’ll approve it immediately,” Mr. Yuguda told the two gentlemen in his office.”In fact, if you have it now, I will sign it so you can go ahead with the burial.”Mr. Oke enquired if the police would foot the bill of the burial expenses since it has been established that death was as a result of police shooting.”I cannot answer the question of who is going to bear the cost,” Mr. Yuguda replied.”If you as the local government chairman take care of it, it won’t be beyond your responsibility,” he told Mr. Oke.Since the shooting, Mr. Fafunmi said that numerous people had been claiming to be relatives of the deceased in order to curry sympathy and financial favour from relevant authorities.”The next thing is to see how we would be able to get the guy buried,” said Mr. Fafunmi.”In the process of burying him, I know that a lot of people would become agitated when they see the corpse.”We would need government presence to control the crowd and all those things.”More than five weeks after he was shot, Mr. Aderinto’s corpse remains at the morgue at the Lagos State University Teaching Hospital, despite pleas by his 64 year old father, who resides at Ilesha, that he be buried as soon as possible.However, family friends hint that the police are deliberately slowing down their investigations.Joseph Jaiyeola, spokesperson of the Lagos State Police Command, said that the police should not be distracted and be allowed to conclude their investigations.”Investigation is still on. The erring DPO is still in detention at the State CID at Panti,” Mr. Jaiyeola told Premium Times.”I cannot tell you anything about the time investigations will be concluded,” he added.Mr. Fafunmi said that the deceased family is demanding for justice and the “youths in his constituency are becoming restless.””The issue is taking longer and the longer it takes, it gives room for anyone to start suspecting foul play or probably to start suspecting political manoeuvring or the incompetence of the police force,” said Mr. Fafunmi.”I want to believe, based on what I discussed with the DCP (Deputy Commissioner of Police) that the police will be fair enough to expedite action to ensure that justice is not denied.”