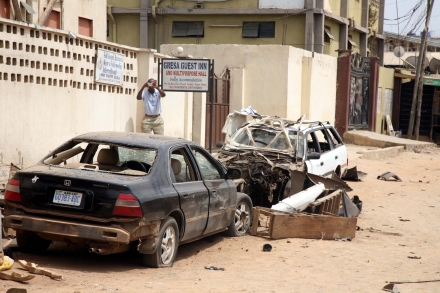 A blast at Morocco road in Suleja town in Niger on Sunday injured five persons and destroyed five vehicles , the National Emergency Management Agency has said.

Morocco road is at the heart of the commercial area in Suleja, and the blast occurred close to a branch of Christ Embassy in the town.
NEMA spokesperson, Yushau Shuaibu, said in a statement on the blast, “one person seriously injured and now in hospital, four victims with minor injury, five vehicles affected.
“No death from Suleja blast.”
Eyewitnesses say they are suspicious the extremist Boko Haram sect are responsible for the explosion.

NAN learnt that the people in the area became suspicious of a parked vehicle without number plate and immediately took measures to keep away from it before it exploded.
The Commissioner of Police in Niger, Ibrahim Maishanu, confirmed the incident.
“I am at present on my way to Suleja to assess things for myself,” he said.
The Niger State Emergency Management Agency, Mohammed Shaba, told NAN that the agency would be moblising to Suleja.
“We will be responsible for the treatment of the injured persons.’’
He said the agency would also seek to speak to other persons, who might have lost valuables as a result of the blast in line with the agency’s mandate of providing financial assistance to such persons.
This is the first blast to affect Suleja this year, after Christmas Day blast in Madalla.