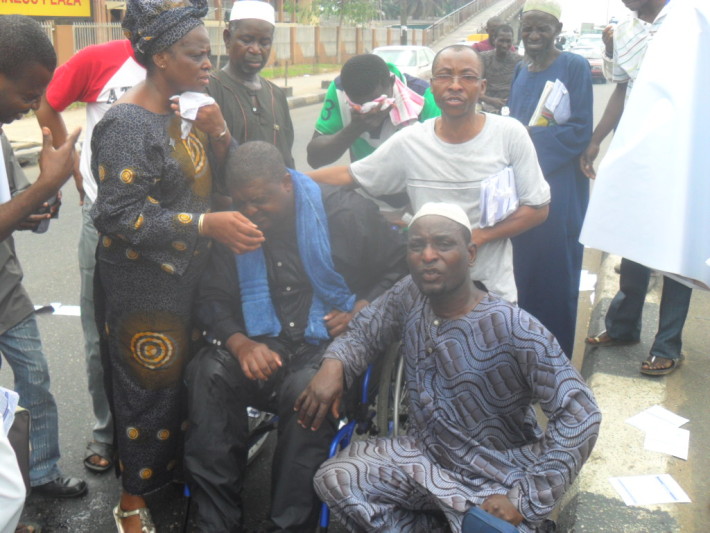 Mohammed Fawehinmi (in wheelchair) gasping for breath after police shot a tear gas canister at him... Photos: Ben Ezeamalu

For the second time in four weeks, officers of the Nigeria Police Saturday violently broke up activists and members of civil society who were embarking on a peaceful march in Lagos.

Dozens of tear gas canisters were shot at the crowd and 20 people were arrested, assaulted, and detained at police stations for hours.

The Joint Action Front (JAF) in collaboration with the Muslim Congress, the Nigeria Bar Association and other civil society groups had planned a memorial in honour of those who lost their lives during the anti-fuel subsidy protests.

Ten people were killed across the country during the protests, according to organizers of the memorial.

The procession began at about 10 o’clock at the Nigeria Labour Congress (NLC) secretariat, Yaba, amidst a heavy police presence and was planned to end at the Gani Fawehinmi Freedom Square, Ojota, where prayers would be offered for the ‘martyrs’ by religious leaders.

“The memorial is for the Muslim, Christian, and other faith-based groups to offer a special prayer session,” said Dipo Fashina, JAF’s chairperson.

“It is to further show that religion can be a unifying force towards national unity, social justice and human centred development, rather than a divisive instrument in the hands of the class of exploiters and profiteers,” Dr. Fashina added.

Abiodun Aremu, JAF’s secretary, called for an immediate prosecution of the police officer who shot Ademola Aderinto at Ogba, Lagos, among other demands.

“Part of the demand we are making is that there must be just compensation to the victims,” said Mr. Aremu.

“We have said that they are ten because we have been able to identify that there is one in Lagos, one in Kogi, one in Kwara, and seven in Kano.”

“We are taking it up legally to ensure just compensation to them and that the trigger happy police officers must be prosecuted.”

At the beginning of the procession, a senior police officer, who arrived at the NLC secretariat, met the organizers of the march and asked that they ensure it was conducted peacefully.

Leading the procession were Ganiat Fawehinmi, widow of the late activist Gani Fawehinmi; Adegbamigbe Omole, chairperson of the Ikeja and Lagos branches of the Nigeria Bar Association; and Tunde Agunbiade, Lagos State chairman of the National Conscience Party (NCP) among others.

Unlike the anti-fuel subsidy march last month, the peaceful procession was restricted to the service lane of the Ikorodu expressway. 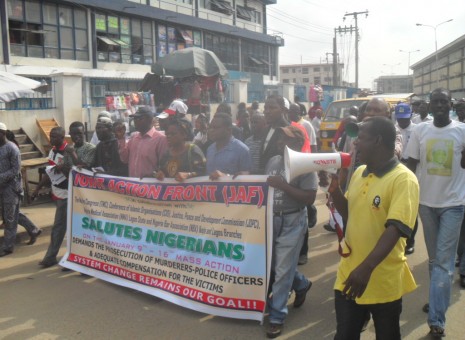 As the procession approached Maryland, more than 20 armed police officers, led by the commander of Area F Division, Ikeja, stationed themselves on the Maryland bridge, barricading traffic with their patrol vans.

It was gathered that another batch of armed police officers had cordoned off the Gani Fawehinmi Freedom Square in the morning.

The police Area Commander, who put on a bullet proof vest as the procession approached, told the crowd to disperse.

Efforts by Dr. Fashina and Mr. Aremu to explain that they had, through their lawyer, informed the police about the procession fell on deaf ears as the Area Commander said he had “an order from above” to break up the procession.

A copy of the notice, written by Bamidele Aturu, a lawyer, and dated February 15, was shown to the senior police officer but he was adamant.

The organizers, who insisted that they did not need the police permission for their procession, decided to ignore the police and continue their march.

Then the Area Commander gave a signal to his boys who immediately shot tear gas canisters immediately into the air.

The crowd in return pelted the police with stones, an action which seemed to infuriate them the more.

More tear gas canisters followed but the activists were unrelenting.

Mr. Fashina, a former president of the Academic Staff Union of Nigerian Universities (ASUU), dared the armed officers to shoot as he tried to force his way beyond their barricade.

Others stood their ground.

The police officers, on the orders of the area commander, started arresting anyone within sight.

“Arrest him, brutalize him,” he barked to a police officer who was on the heels of a journalist.

About 20 people were arrested and taken to the Special Anti-Robbery Squad (SARS) office, Ikeja, and the Alausa Police Station, where they were detained for hours before their eventual release.

“We were brutalized, tortured, battered and taken down to police command,” said Ishola Musbau after they were released.

“They used guns and batons on us, kicking us with their boots.” 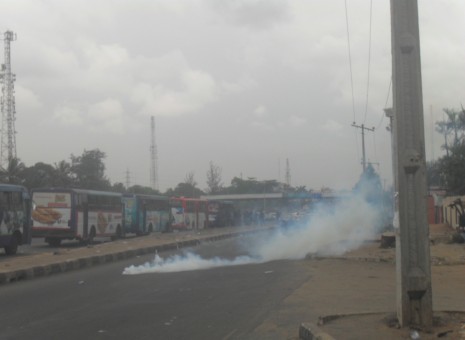 Mr. Aremu described the police treatment of the activists as “uncalled for and unacceptable.

“The Area F commander, whose name we are still searching for, elements like that do not deserve to be in the police for one minute,” said Mr. Aremu.

“We have the right to our freedom and that’s what we must emphasize because the Lagos State police command cannot justify why that happened.

“As a matter of fact, the excuses they are giving is that the order is from the IG (Inspector-General), so the IG must defend himself whether he is the one that ordered… without the knowledge of the Lagos State police commissioner,” said Mr. Aremu.

Mr. Agunbiade said that the march was necessary because “it is the only way to make our grievances known to the government.”

“It is unpardonable for an area commander to do what he has done to us today,” said Mr. Agunbiade, who was also arrested and detained.

“We were on a peaceful procession and fighting for our rights and we don’t see the reason why the Nigeria police had to take the action they had taken today,” he added.

Chude Achike, JAF’s deputy chairperson, wondered why the activists would be detained at the anti-robbery station.

“Sometimes you tend to think that the police have learnt one or two things in the way they conduct themselves… you want to think something positive about them,” said Mr. Achike.

“But it does not take long before they show their true nature and that is that of brutality and intimidation.”

Mr. Aremu said that another march would “definitely” take place.

“No amount of repressions, brutalization will stop us from doing that until we reap the maximum freedom and happiness that Nigerians deserve,” said Mr. Aremu.