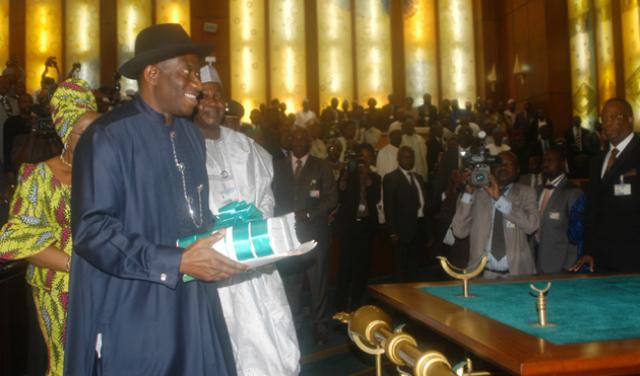 A build up of ghost wages that helped swell the 2012 federal payroll, is delaying the passage of the national budget, the House of Representatives said Thursday, days after a senate committee confirmed N1 trillion worth of fraudulent projects had been detected in the document.

The House said the senate’s figure which its leadership has already denied, were doubtful, but confirmed it had been alerted by the executive arm of a significant number of ghost workers in the budget.

The ghost workers are part of the proposed beneficiaries of the unwieldy N2.47 trillion recurrent cost out of the N4.75 trillion total budget presented by President Goodluck Jonathan last year. Following the discovery, the federal payroll is now being scrutinised, and the House is awaiting the outcome next week.

“The executive just discovered ghost names and that will mean the recurrent budget will be further slashed,” said committee chairman, Zakari Mohammed.

Mr. Mohammed said the figures found were not yet clear as the house expected an official communication on the details next week. That may extend the passage of the spending plan, which both chambers said they were working towards February ending, by weeks, he said.

“Of course there is no need hurrying to pass the budget when there are grey areas unresolved,” he said.

Besides gulping, on the average, a third of annual federal budgets, recurrent expenditures have in the past been padded with questionable subheads and ghost names that increased  the total budget, lawmakers have said.

The House revelations came after the Chairman of the Senate Committee on  Appropriation, Ahmed Maccido, announced the committee had uncovered nearly N 1 trillion worth of projects allegedly smuggled into the budget by some Ministries, Departments and Agencies (MDAs).

Mr. Maccido, who spoke to reporters on Tuesday, said about 40 percent of the projects seen were not captured in  the N4.75 trillion budget estimates presented to the National Assembly by  Mr. Jonathan.

He vowed the committee would not allow any fraudulent projects be sneaked into the budget in a well quoted news statement.

“Substantial part of these projects is being smuggled into the  budget by the MDAs and Ministers. The smuggled items cost more than  N1trn”, he stated.

“So right now, we are comparing the budget as originally presented by the president and the version presented by the MDAs. Unless these projects are there in the original budget  estimates, we are going to scrap them,” Mr. Maccido added.

But on Wednesday, a day after the remarks were made, the senate president, David Mark, and the senate spokesperson, Eyinnaya Abaribe, disowned the committee’s position.

At a press conference, Mr. Abaribe said the remarks should not have been credited to the senate, but to Mr. Maccido, but he left no doubt the senate sought to distance itself from a potentially controversial subject.

The House said on Thursday while it may not dispute the position of the senate committee totally, but it doubted the figures announced.

“I don’t think the information was quite correct. How much is the total budget that we will have N1 trillion as fraud. The difference may not be that much,” spokesperson, Mr. Mohammed, said.