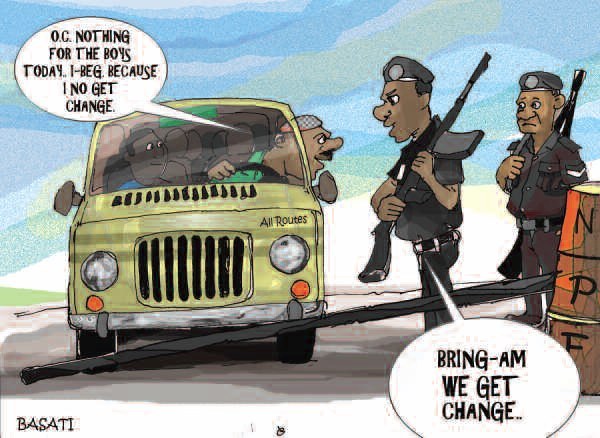 Police officers just can't slow down on the corruption game

On Wednesday, we requested our readers nationwide to let us know if the police checkpoints around their neighbourhoods have disappeared in line with the directive of the Acting Inspector-General of Police, Mohammed Abubakar.

Following widespread cases of corruption at the checkpoints, Mr. Abubakar had directed the dismantling of all intra-state and highway road blocks nationwide.

But the reports we got from all parts of the country Wednesday is that police officers are disregarding the IG’s order, and have continued to extort motorists.

In Udu and Effurun in Delta state we have them after every two poles, they even run shift…korofo n JTF…all they say is *where am*?

I am presently at Iwo in osun state. We have about 5 police checkpoints between Iwo and ibadan. All they do is take money from the motorists and harass who ever tried to challenge them.

There is a police checkpoint @iyana ejigbo yesterday

Idiroko rd ogun state still full of check points by the police. Still on with the trade

This is funny, police check points are everywhere in Akwa Ibom state,,no change wonder who they are deceiving.

Faced 5 checkpoints in Abuja last night. Guess they didn’t get the memo

There are road blocks from Osogbo to Gbongan road nonsense

Lagos to Ilesa 10:05am, Police road blocks everywhere, guess these ones have a separate IGP?

Benin – Ore Road, has about 1 Checkpoint per Km

A fed up Nigerian @IamMuchaio

Still ran into a road block in front of Iyaganku Police station in Ibadan last night. Police dey do val too lol

In my area in front of my house @policeng still collect #20 from okada riders with force.”

Ayansina Adebayo Nigerian police are stubborn set of people. There is still a road block in Osogbo Osun state capital. The road block was mounted at ota-efun along ikirun.

Hon Nwachi Damian Onwuama In portharcourt road in onitsha there is a police check point there with Mopol even wearing slippers.

Otunba Folasayo Abiola There are still road blocks from Ibadan to Akure- Owo-Ifon- Benin as of yesterday and dis morning. The usual business still continues.

Uwaifoh Okpebho Right now they are at Abule-Egba bus stop near Ekoro junction in a white pick up van. They will not obey they enter police for that purpose to stop them will be hard. But this will decide the success and failure of this IG of police

From Ogo Oluwa area to Ola iya junction in Osogbo,there are more than 5 police check points causing serious traffic jam.A movement that hitherto takes less than 5 minutes drive now takes more than an hour.Infact the state government supports these checkpoints by providing customized make shift gates to the police to block the road.Their reason for doing this is to protect the banks along the area from armed robbery attack. Something urgent should be done on this.

The check point under and above the brigde as you drive from oshodi towards international air port is still there this hour.

All over Akure, Ondo state. Infact feels like more are springing up in d name of surveillance

Ladan S A – – The checkpoints are all 0ver Kaduna. In some cases streets are blocked completely where Military/police formations are located. They harrass people and cause serious accidents.

‘TM’ – – Along abeokuta-ibadan road,there’s a road block,at a bus-stop called elewe-eran,just after a place whr onions are sold.  They are from the police station. They extort a some of 50 naira and even higher than that from cab men which stops them from moving in that area making transportation uneasy for the masses in beyond that area.

Sheagunleye – – Checkpoints still holds in Ogbomoso and environs till now

Charles Mubula Mopho – – There are still checkpoints in Port Harcourt. At Aggrey Road by the post office and NEPA office near the end of the Aggrey Road.

Collins Lekan – – Checkpoint all over everywhere in Aba

Godfrey Tom – – checkpoint at Uyo-Nung Udoe Road, Akwa Ibom State. There, the drivers have to park, come out of the car and take their money to the officers. In fact, if you have no change, they can change your money for you.

Ugo ogbonna – – There are several police check @lasu-igando road,especially in the evening

– One at Ahmadu Bello Road by Murtala Muhammad Lib,Kano

– One close to Railway Line by Gandun Albasa

– One at Dan Agundi along BUK road

Jonathan says NO to national conference