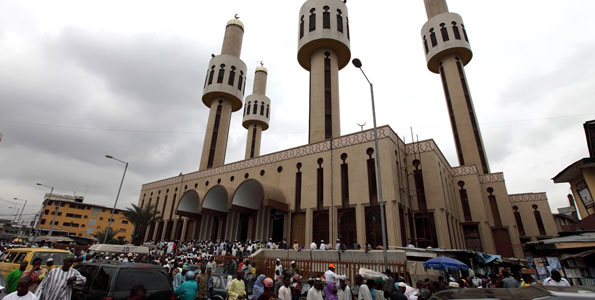 A mosque used to illustrate the story

Hausa Community cries out over planned demolition in Aba

The Hausa Community in Aba, Abia State, has sent an SOS message to Governor Theodore Orji, over the planned demolition of shops around the Aba Central Mosque.

Ibrahim Bello, the leader of the community and Bashir Idris, the Chief Imam of the mosque, made the plea in an interview with the News Agency of Nigeria (NAN) in Aba on Wednesday.

Mr. Bello told NAN that they heard that the state taskforce on the demolition of illegal structures had concluded arrangements to demolish the shops around the mosque.

He said that they were saddened at the plan as the shops were built with the approval of the authorities of the state.

According to him, at no time in the history of the mosque have they had any misunderstanding with any previous administration in the state.

“The mosque and the adjoining shops were built in the ‘60s, before the Nigerian civil war and we have had no problem with any government in the state since then.

“Even when the mosque was destroyed in 2002, the then administration, based on the approval already obtained, allowed us to rebuild the mosque together with the shops which also serve as offices,” Mr. Bello said.

He said that the shops were not built on the drainage and did not in any way obstruct the free flow of traffic and appealed to the governor to prevail on the taskforce chairman not to go ahead with the planned demolition.

“If our plea fails, it then means, they are being asked to return to the North which the governor had earlier promised against.

“If the governor should allow the shops to be demolished as planned, it then means he approved that all of us should go back to the North, which of course he had earlier promised he will not do.’’

Also reacting, Mr. Idris said the taskforce should be made to understand that there was nowhere in the world, not even in Saudi Arabia, that mosques were not built with adjoining blocks.

He said that the adjoining blocks in the mosque usually served as offices to the Chief Imam and other supporting staff.

“All over the world, even in Saudi Arabia, mosques normally have blocks attached to them which serve as offices to the Chief Imam and other officials and that of Aba is not different,” Mr. Idris said.

The Commissioner for Works, Kingsley Mgbeahuru, told NAN that the on-going restructuring exercise in Aba was not to witch-hunt anybody.

Mr. Mgbeahuru explained that the exercise was to give the city a face lift, stressing that the taskforce on demolition of illegal structures was working according to directives.

He said that the taskforce would demolish structures built on the drainage channels or those obstructing free flow of traffic in the city.

He, however, assured the Hausa community that government was ready to give them adequate protection to live in peace in the state.