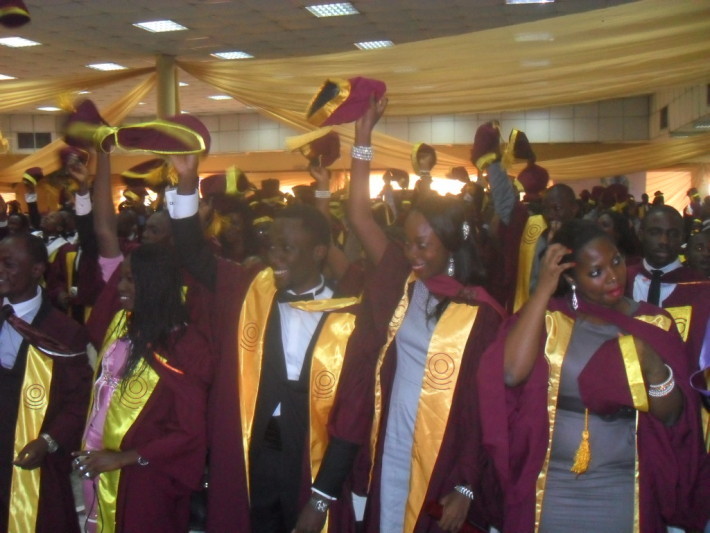 A hundred and eighteen students completed their studies with a First Class Division in the 2010/2011 batch of graduating students of the University of Lagos, with Josiah Akhigbe, a Mechanical Engineering student, amassing a Grade Point Average of 4.98 out of 5.00, the highest in the institution’s history.

At the university’s convocation ceremony, Wednesday, 8,585 students in both the undergraduate and postgraduate fields successfully completed their studies in the academic year.

“I am proud to note that our students are doing very well,” said Adetokunbo Sofoluwe, the university’s Vice Chancellor.

“This is because of the conducive and enabling environments which have paved the way for our students to excel not only in their academics but in local and international competitions,” Prof. Sofoluwe added.

The university helmsman also announced that the school has received green light to commence degrees in Nursing, Medical Laboratory Technology, Geophysics, Geology, Fisheries, and Early Childhood in the 2011/2012 academic session.

No student graduated with First Class in the Faculties of Law and Pharmacy.

“To some people, it is a period of reaping the fruits of one’s labour.

“To others, it is a period of public recognition and commendation while some see it as a period of crowning glory during which students who have attained some skills and knowledge are formally given their ‘licences'”.

With Aliyu Obaje, the Chancellor of the university being “unavoidably absent,” Prof Sofoluwe presided over the conferring of degrees and award of diplomas and certificates “as dictated by the University constitution.”

Mr. Akhighe, who did not attend the day’s ceremony, went home with the Vice-Chancellor’s Prize N5,000 worth of books as well a N100,000 Alumni Prize amongst a host of other awards.

Joining him at the summit of academic excellence was Esther Akanni, who also graduated First Class in Accounting with a 4.93 Grade Point Average.

Ten outstanding students who are in their fourth or fifth year in the Faculty of Engineering with Cumulative Point Average 4.0 – 4.9 received
Scholarships worth US$15,000 each and will enjoy automatic employment at the completion of their academic programmes.

For Tolulope Ayodele, who finished with a First Class in French, success was a combination of determination and hardwork.

“I intend to be an ambassador for my country, Nigeria is surrounded by French countries,” said Miss Ayodele, 23.

Kehinde Adebayo, 22, who despite being the head of the Botany department students’ association in his last two years at the school finished with First Class, said his journey to the zenith of academic excellence was due to “effective time management.”

“Unilag (University of Lagos) is a very social school so you have to mix everything up – the social and the reading, but the reading more and putting God first,” said Mr. Adebayo.

“What I did was to manage my time, there was time for everything,” he added.

Kevin Onogbode said that the journey was not without its challenges.

“One of the challenges was actually the tough hand you get from your lecturers, they are not being lenient compared to other universities,” said Mr. Onogbode, a graduand from the Department of Business Administration.

“Unilag is somewhere that you don’t have to play away your time, you’ll probably not come out with a very good result,” Mr. Onogbode added.

The Vice-Chancellor received a rapturous applause and shouts of appreciation from the graduands when he announced that their certificates “are ready and can be collected today on completion of all necessary clearance.”

The convocation ceremony continues on Thursday.