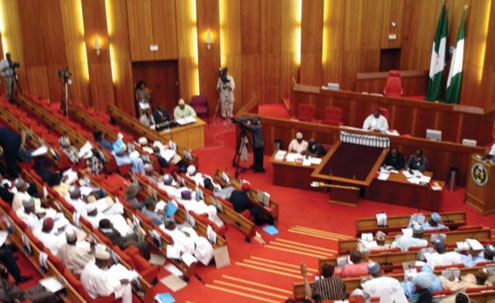 The Chairman of the Senate Committee on Appropriation, Ahmed Maccido, says the committee has discovered that some Ministries, Departments and Agencies (MDAs) have smuggled more than N1 trillion worth of projects into the 2012 budget.

Mr. Maccido made this known in a statement he issued in Abuja on Tuesday.
He said that about 40 per cent of the projects were not captured in the N4.7 trillion budget estimates presented to the National Assembly by President Goodluck Jonathan..
He vowed that the committee would not allow any fraudulent project to be sneaked into the budget.
“We are seeing projects that are not in the original version of the budget presented to us by President Goodluck Jonathan.
“Substantial part of these projects is being smuggled into the budget by the MDAs and Ministers. The smuggled items cost more than N1trn”, he stated.
He said the committee was painstakingly comparing the original version of the budget estimates presented by the President with the one brought by the MDAs, in order to weed out all fraudulent inputs.
“So right now, we are comparing the budget as originally presented by the president and the version presented by the MDAs.
“These people are just smuggling in projects that are not in the budgets. Unless these projects are there in the original budget estimates, we are going to scrap them’’, Mr. Maccido added.