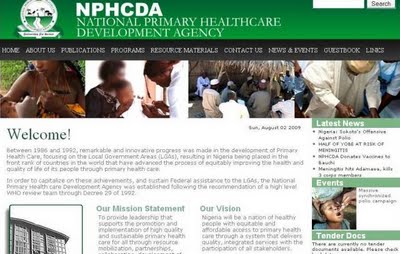 Despite the fact that its website has been hacked for over three weeks, an autonomous agency under the Federal Ministry of Health, the National Primary Healthcare Development Agency (NPHCDA) claims it is not aware of the hack.

Hackers claiming to be “Rwandan Hackers” have hacked the website of the government agency (www.nphcda.gov.ng) since January 20, 2012. The hackers defaced all the pages of the website except the home page.

Some of the inscriptions left on the website include “Your security was zero. That is why you got owned.”

The hackers also warned the agency to sit up or get booted off the internet.

“Don’t chase me. I left no logs. If you do not patch it soon, I’ll kick you offline soon,” the hackers said.

We are not aware

Sa’adu Salahu, the head of the Public Relations unit of the NPHCDA told Premium Times that he was not aware that their website had been hacked.

“I have not logged  onto our website today, so I don’t know anything about it,” said Mr. Salahu, who said he was speaking from Kebbi where the agency had gone to launch a program and asked if this reporter is the one who hacked the site.

“Are you the one who hacked the site,” Mr. Salahu asked when he was informed that the website had been hacked.

He declined to make further comments until his return on Monday, next week

Other officials at the agency declined comment saying only Mr. Salahu could speak to the press. But an official of the agency, who did not want to be identified said staff of the agency rarely visited its website and so were not aware.

Several Nigerian government websites have been hacked in recent times. Some of those previously hacked include the website of the Niger Delta Development Commission, Economic and Financial Crimes Commission and that of the Nigeria Labour Congress.

This is however the first time that a Nigerian government website is hacked by hackers from another African country.