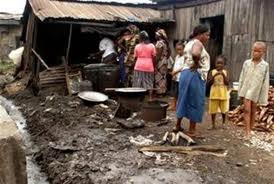 Various programmes initiated by the government towards poverty reduction in the country was not quite successful in 2011 as the country saw a rise in the poverty level during the period under review, a National Bureau of Statistic (NBS) survey has revealed.

At the end of 2011, 72 per cent of Nigeria’s population (about 120.24 million) were among those categorized as relatively poor, the NBS says.

The NBS said in its ongoing Annual Socio-Economic Survey, which would be completed later this year, that there was a marginal increase of about 2.5 per cent in the poverty rate above the 69 per cent rate (about 115.230million)  recorded in 2010, while about 112.52 million or (67.38 percent) others are recorded to be living below poverty line.

The proportions of those classified as the extremely poor, moderately poor and not-poor Nigerians stood at about 38.7 per cent, 30.3 per cent, and 31 per cent respectively last year.

Statistician General of the Federation, Yemi Kale, while providing a statistical analysis of the general living standards of Nigerians, also put the 2011 estimated absolute poverty and dollar-per-day levels in the economy at 61.9 per cent and 62.8 per cent respectively.

While the relative poverty level refers to the living standards of majority of the people in any given society, the absolute poverty relates to the minimal requirements necessary to afford minimal standards of food, clothing, healthcare and shelter and the dollar-per-day measures refer to the proportion of the population living on less than one dollar per day poverty line.
Mrs Kale disclosed that while the relative poverty measurement in the country stood at 54.4 per cent in 2004, the rate had since risen to 69 per cent in 2010, with a projection to rise further to 71.5 per cent at the end of last year.

“The situation is likely to worsen with the recent economic crisis as a result of the hike in the cost of fuel, which resulted in increased costs of goods and services by over 100 percent as well as a decline in the purchasing power of most Nigerians, especially those at the grassroots,” Mrs Kale said.

According to her, as at 2010, statistical figures of poverty measurement when analysed on geo-political zones basis showed that the North-West and North-East zones accounted for the highest poverty rates with 77.7 per cent and 76.3 per cent respectively.

The South West, with 59.1 per cent, recorded the lowest poverty rate in the country.

A further analysis of the poverty level on state-by-state basis showed that Sokoto had the highest number of poor people in the country with 86.4 per cent of its population recorded as not enjoying good living standards compared to Niger State, which had the lowest poverty rate of 43.6 per cent by the end of 2010.

On the 2011 estimated poverty rate, Mrs. Kale stated: “For completeness and to guide policy, NBS has also forecast the poverty rate for 2011 using various economic models. It is important to stress at this point that these estimates are constrained by the assumption that the status quo in 2010 was maintained in 2011.

“Accordingly, it ignores the potential positive impact various poverty alleviation strategies implemented since 2011 may have had on reversing the trend. This will become clearer once the 2011 Annual Socio-Economic Survey is completed later in the year. Thus, using the relative, absolute and dollar-per-day poverty measures, NBS estimates that poverty may have risen further slightly to 71.5 per cent, 61.9per cent and 62.8 per cent respectively in 2011”, the NBS boss added.