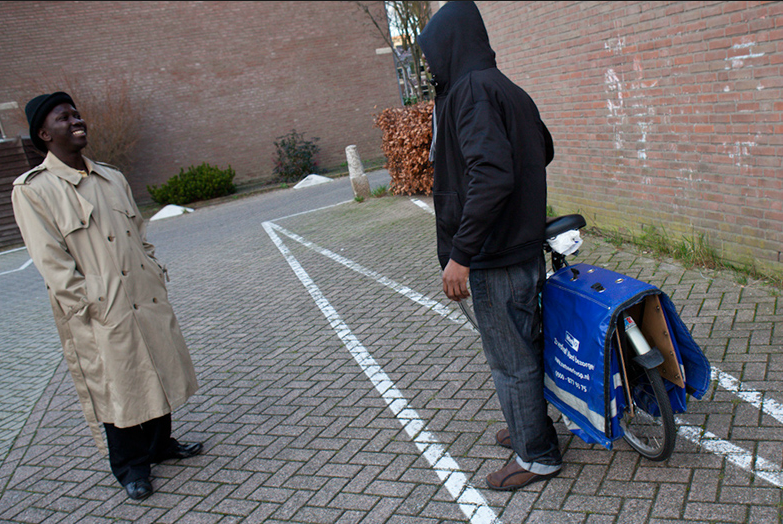 Wale Matthew, a Nigerian from Delta State, came to the Netherlands in September 2010. He was arrested at the Schipol airport for possessing a fake Schengen/ German Visa.

Matthew insists the visa is original as he paid N600, 000 (2,800euro) to a travelling agent in Abuja for it. He had also travelled to Europe on two previous occassions.

“I followed my brother to Turkey and Croatia, and I had no issues with my visas,” he said.

Following his arrest, Matthew was imprisoned for four months.

“When I was arrested, I pleaded with them to let me return home, I told them the visa could not be fake for I got it through a registered travel agent, but they said no. I had to go to jail here because my visa was fake.”

His jail term lapsed in December 2010. At which point he was asked if he was still willing to return to Nigeria by the authorities.

“I said no. I mean, since they made me stay in Jail here, I decided to remain in the country. I always wanted to work and raise my family in Europe anyway. And people at the prison had advised me to reject the offer to return home if presented again,” Matthew stated.

Matthew was released on December 24, 2010 and taken to a detention centre in Schipol for a month. He visited the asylum application centre also in Schipol from there and after several interviews was taken to an asylum camp in Dronten.

To be allowed into the refugee camp (Aduro), Matthew told his story of how it was difficult surviving in an oil producing community in Nigeria.

Born in Lagos, Matthew is from Oghara, an oil producing community in Delta State. To secure asylum, he told the Dutch authorities of how various governments in Delta state failed to execute projects to better the lives of the people; corruption among public officials; land pollution; and how he wanted to remain in Europe to work and earn a living.

Matthew, a dropout from the University of Benin, sought refugee status that would enable him legally work and live in the Netherlands.

Five months after being accepted into the camp, his stay was terminated.

Stuck in the Netherlands

Matthew met an American on a dating site while at the asylum camp. He was asked to leave the Netherlands when his fiancée came for him.

“My woman (fiancée) came in May and by June they asked me to leave camp. They said since someone has come for me, I should leave and go with her to the United States,” he said.

Matthew is however stuck in on the street of the Netherlands. His passport was seized when he was first arrested at Schipol, and has not been released to him.

“When they asked me to leave, I said okay, give me my passport or some form of travelling document, say a United Nations passport with which to travel to the US with my love.”

“I cannot get a job anywhere because I have no papers; I have no place to sleep as I was evicted from the camp. If I fall sick, I am in trouble. I cannot earn a living and I survive only by the grace of God, assistance of my fiancée and some Nigerians over here.  A Nigerian allows me to sleep in his spare room,” Matthew says while showing off his room in Rotterdam.

In May 2009, while trying to evade arrest from the Dutch Police who suspected him of engaging in drug peddling, Azubuike, a Nigerian, jumped from his apartment on the 9th floor of his building in Southeast Amsterdam (Bijlmer) leading to his death.

His death led to a protest by the black community in Amsterdam made up of Dutch Surinamese and African Migrants and largely based in the Bijlmer. The protest was against the high-handedness of the Dutch Police on illegals.

One of those behind the protest is John Obule, a Nigerian, and head of the Goodwill Homage Foundation (GHF), who has resided in the Netherlands for 22 years.

“Many of these boys go into crime as a means of survival,” Mr. Obule explains

Through his foundation, which is being assisted by Dutch authorities, Mr. Obule helps migrants to settle in the Dutch community; teaching them crafts, computer skills and language courses.

He is also working with the Dutch Government to assist some of the illegals return to their country; though he says that proposal stalled when the new Dutch conservative government came to power.

No return for me

None of the illegals spoken to wants to return home.

For Matthew, it is either the Dutch Government releases his passport to move on to the US to join his wife and his new baby, or they grant him residency in the Netherlands.

“What is in Nigeria that anyone would want to return to? Even you know that things are getting worse over there every day, he says.”

Nimota Akanbi, the Nigerian ambassador, however states that the embassy assists any Nigerian who come to it for assistance.

“In the case of an illegal migrant, when it is established without reasonable doubt that he’s Nigerian and there’s nothing that’s keeping him here, he requires a travelling document. We provide these,” she said.

8 US companies to invest in the power sector in Nigeria