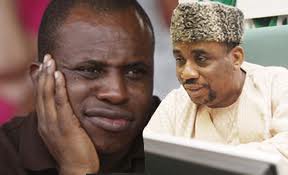 The Economic and Financial Crimes Commission (EFCC) has appealed the ruling of an Abuja High Court that acquitted and discharged the former speaker of the House of Representatives, Dimeji Bankole, and his deputy, Bayero Nafada, over a case of fraud and embezzlement of N38 billion.

The notice of appeal was filed Wednesday by counsel to the EFCC, Festus Keyamo, at the Court of Appeal, Abuja.

In the appeal, the EFCC said the judge, Suleiman Belgore, erred in law when he held that Messrs. Bankole and Nafada had no case to answer with regards to criminal breach of trust because they were not signatories to the bank accounts of the House of Representatives.

The anti-graft body said that although the Speaker and his deputy were not signatories to the accounts, they had approving authority to the said accounts and were entrusted with the accounts. The EFCC also held that the two men were in meetings in which the decision to obtain the loan was taken and so are liable for the operation of the accounts.

“Evidence clearly shows that the accused persons were present at meetings where it was collectively “resolved” to obtain loans and increase “running costs”.

The EFCC also disagreed with the trial judge that Messrs. Bankole and Nafada were not liable for theft, since they were being tried for criminal breach of trust.

“Both in fact and in law, the offence of theft can be charged together with criminal breach of trust, contrary to the decision of the learned trial judge”. Mr. Keyamo said.

The EFCC currently seeks the appellate Court to grant its appeal and set aside the ruling of the trial judge.

The anti-graft body also wants the Court of Appeal to order a re -trial at a lower court by a different judge.

90 per cent of Boko Haram victims are northerners, says ACF