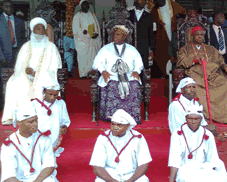 The deposed Obong flanked by the Sultan of Sokoto and Eze Elemaya Photo: Courtesy Google

The Obong of Calabar, Edidem Ekpo Okon Abasi Otu V, has been dethroned by the order of the Federal High Court, Calabar, after almost four years of legal battle.

Delivering judgment in the case instituted by one-time Minister of Finance, Anthony Ani, and four others in April 2008, Justice Obojor Ogar, restrained the deposed Obong from parading himself in that capacity pending when a proper election is held to elect a new ascendant to the throne.

The restraining order also barred the Etubom Traditional Council (ETC) from excluding the former minister and Mbiabo Ikoneto from any election or selection for the Obongship race.

Mr. Ani and his group had sued the dethroned Obong along with seven others to contest the verdict of the Etuboms Council in selecting and proclaiming Edidem Ekpo Okon Abasi Otu V as the Obong of Calabar.

However, the crisis that disrupted normal official activities in the wake of the recent petrol subsidy removal by government necessitated the judgment being postponed to January 27 before it was later rescheduled for today.

The counsel to the Etubom Traditional Council, Paul Eba, said the council is studying the judgment, but expressed regrets that the ruling did not make any specific order to the government asking it to withdraw the certificate of recognition it issued to the dethroned Obong.

In his statement of claim, Mr. Ani, through his counsel, had sought for a declaration that the presentation and/selection of Edidem Otu, who was Chairman of the screening committee for the selection of the Obong of Calabar, was “contrary to natural justice, equity and good conscience.”

Mr. Ani had contended that Mr. Otu was not qualified to be selected and/or appointed the Obong of Calabar since he hails from Adiabo, which is contrary to the decision of the Western Calabar Traditional Rulers Council vesting in Ikoneto the exclusive right to produce the next Obong of Calabar.

In addition, the former minister had asked for a declaration that the rejection of his group’s complaints against the selection and/presentation by Etuboms Traditional Rulers Council of the Obong’s Palace was in violation of their right to fair hearing, thus an injunction restraining the government from according recognition and/or giving staff of office to the Obong-elect was necessary.

However, counsel to the defendant, Mr. Williams, who was represented by Rebecca Tanga, asked the court to dismiss the applicant’s claims, saying “he was not qualified to be Obong of Calabar.”

Prior to the trial, two injunctions were granted as parties agreed to resolve the issues in favour of Messrs Ani and Mbiabo Ikoneto.

In his ruling, Mr. Ogar restrained the ETC from conducting any election or selection of an Obong of Calabar without the participation of Mr. Ani and Mbiabo Ikoneto, as doing otherwise would render such acts null and avoid.

Mr. Ani’s counsel, Mr. Agi, agreed with the judgment, which also granted all the five prayers his client canvassed.

“We are satisfied with the judgment. But though the court has not specifically said the certificate issued by government has been withdrawn, it is obvious that it is. The certificate of recognition given by the government has no weight. In fact, it is worse than a piece of paper because it was based on fraud,” Mr Agi said.

Counsel to the ETC, Mr. Eba, who said they were studying the judgment with the hope of filing an appeal, insisted the Obong is still the rightful occupant of the throne.

“The judgment is a mere declaration that Ikoneto has right to contest,” he said. “Definitely, we are going on appeal to determine some issues raised by the judge”.