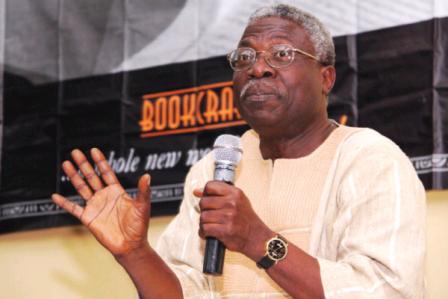 In the wake of the recent massive protests against the increase in the pump price of petroleum products and escalating terrorism attacks of the extremist Boko Haram sect, a group of Nigerians, under the aegis of the Committee of Concerned Nigerians, including Nigeria’s internationally acclaimed poet and US-based distinguished Professor of English, Professor Niyi Osundare, has called for the convocation of a national conference to resolve the “fundamental crisis” in Nigeria.

Mr. Osundare is joined in making the call by more than 60 other eminent Nigerians at home and abroadincluding the son of the late leader of the National Democratic Coalition (NADECO),  who is the leader of a socio-cultural group, Atayese, Mr. Tokunbo Ajasin, and US-based Nigerian professors; Amina Mama, Toyin Falola and Funke Okome.

Stating that the “fundamental problems raised by the civil uprising” remain “unresolved”, the group says that the convocation of a national conference is the only way to save Nigeria from “imminent collapse”.

“The government of President Goodluck Jonathan, by its simplistic and haughty responses to the true wishes of (Nigerians) … has lost a golden opportunity to align itself with the people whose mandate it claims to hold,” the statement said.

The group stated that “even though they are provoked by, and react to, different aspects of the national crises, both the terrorism of the Boko Haram group and the gallant efforts by the masses and the civil society against the increase in the pump price of oil, are manifestations of a perilous incoherence in the structural composition of Nigeria and the manner in which the country has been, and is being, administered.”

While stating that President Jonathan has been rendered “inarticulate” by the incessant terrorist attacks perpetrated by the Boko Haram, the group argued that these attacks, and the protests, raise “questions on the corporate existence of the country.” Osundare and others advised that this should compel Nigerians and the government to address the question of “Which Way Nigeria.”

The group, which described its members as “joint stakeholders in the Nigerian project”, condemned the “glaring incompetence, corruption and lack of vision” of the Jonathan administration, adding that the government’s shortcomings constitute a threat to the continued existence of Nigeria as a corporate entity.

“In spite of the promises that have been made by the present economic managers, the Nigerian masses and the withered middle class will continue to experience a life of unrelenting misery unless a new path that encourages a fundamental and holistic restructuring of our national life, including economic and political structures, is stated immediately.”

The group which includes scholars, writers, activists, and others, both young and old and from every part of Nigeria, criticized the imposition of what it called “mere postulations of development economics which are not interrogated through nationalists analyses of local circumstances and historical conditions”, while condemning the tendency of Nigerian government to take “instructions from Washington D.C. or London and other Western capitals.”

The Committee called on Nigerians both at home and abroad to continue to struggle and work together in various ways to ensure that Nigeria does not become another Somalia or Sudan or go through the recent experiences of Sierra Leone and Liberia, through the convocation of a National Conference.

SaharaReporters’ Sowore: A thorn in the flesh of corrupt Nigerian officials