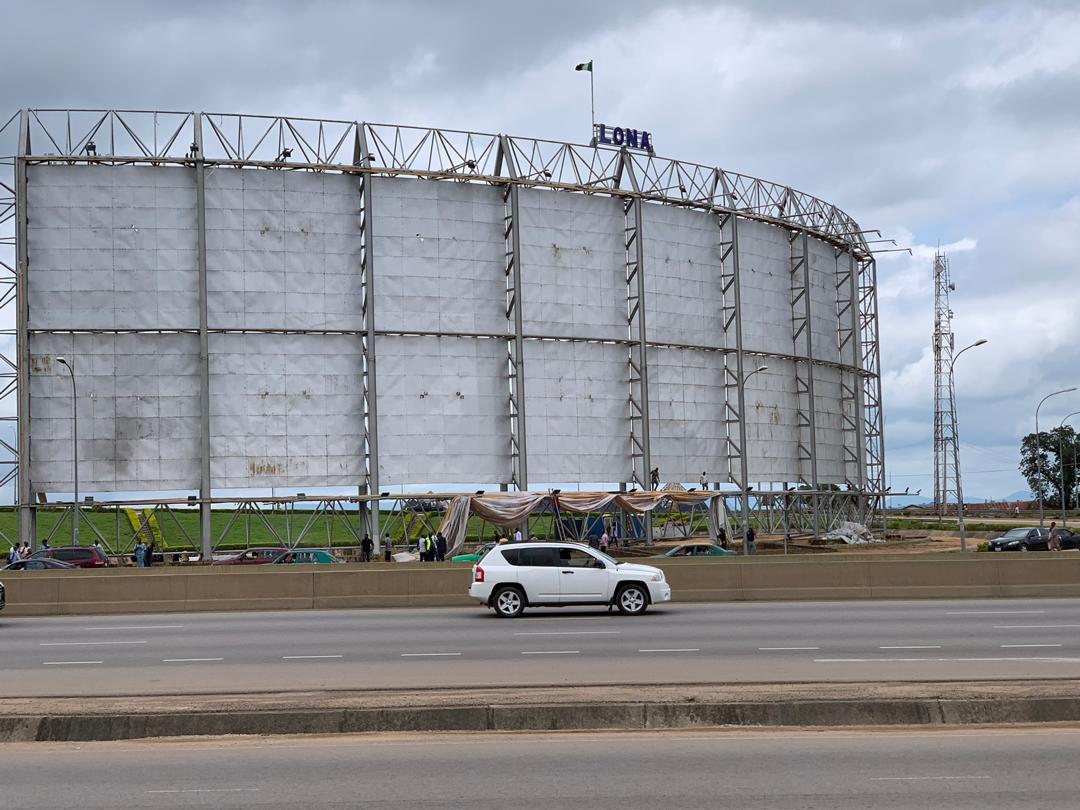 The billboard, measuring 30 by 90 metres by Lona Group in Abuja

A giant billboard owned by a Nigerian advertising firm has become the latest casualty in the worsening wave of protests over xenophobic attacks in South Africa.

The billboard, measuring 30 by 90 metres, was installed and operated by Lona Group, an indigenous outdoor advertising firm. It, however, carried, exclusively, MTN commercials. It was installed at the Federal Housing Junction on the Lugbe axis along the expressway leading to Nnamdi Azikiwe International Airport.

At about 10:00 a.m. on Wednesday, a pocket of protesters descended on the facility and turned down the electronic facade that carried the MTN commercials that flicked in the composite.

The frames around which the well-illuminated billboard was wrapped were not destroyed. A witness told PREMIUM TIMES it was because the facade was pulled down first and the iron frames would not catch fire.

There were also claims that the owners intervened promptly to prevent absolute destruction of the edifice, which opened in July 2016 with discounted wireless internet services for people using the well-manicured lawn underneath.

Kingsley Ilonah, founder and chief executive of Lona Group, said he was devastated by the destruction of his business by his fellow Nigerians.

He said a mob of about 2,000 turned down the billboard, despite appeals from his staff members on the ground that it was a Nigerian-owned investment that should not fall casualty of any disaffection with South Africa.

Mr Ilonah also said he has been a private player in the Nigerian economy for many years, providing jobs for his fellow citizens.

But the destruction of the billboard “has caused a major setback for our business,” Mr Ilonah said, adding that it was entirely unwarranted and unjustifiable.

An outlet of the clothing chain, PEP, was also attacked in Lagos and its contents looted by opportunists who were out to exploit what many largely saw as a diplomatic fallout between two allies.

The violence spread to Abuja on Wednesday morning. Shortly after the Lona Group’s billboard was pulled down in Lugbe, violent elements amongst the protesters besieged the Novare Mall nearby, attempting to breach its security and cause chaos.

The police, however, promptly intervened, with a detachment of anti-riot personnel. The demonstrators then looked for disused car tyres nearby and set them on fire on the expressway.

The bonfire and the panic that ensued sparked chaos on the road. Traffic inwards the airport from downtown Abuja were diverted by the police, prompting effusive abuses on the protesters from motorists.

“We are all angered by what is going on in South Africa to our brothers and sisters over there,” a motorist, Agnes Jitoboh, told PREMIUM TIMES. “But we should not bring hardship on ourselves because we are protesting violence and injustice elsewhere.”

At least 600 officers, comprising several units and specialisations, were deployed to the Lugbe axis to respond to the crisis. They were led by an assistant police commissioner from the F.C.T. Police Command’s department of operations.

PREMIUM TIMES learnt from interviews with officers at the scene that there were no arrests as of 1:00 p.m. because they were deployed to keep peace and not necessarily to engage irate protesters.

Still, the Novare Mall would remain closed throughout Wednesday and possibly longer until all threats have been cleared, police said.

President Muhammadu Buhari and senior diplomatic officials have condemned the attacks on Nigerians in South Africa and said solutions were being explored to forestall further attacks and extract compensation for losses inflicted on Nigerian citizens by South Africans.

The government also warned against attacks on South African businesses in Nigeria, saying such acts were misguided and counterproductive.

President Cyril Ramaphosa has also expressed grief over the attacks and called on all affected nationals to exercise restraints. He also promised a thorough prosecution of those accused of fomenting the violence to prevent further damages to diplomatic ties.

Since its first Nigerian outlet was opened in December 2005 in Lagos, Shoprite has grown rapidly in locations and retail market share. It now has at least 25 stores across eight of the country’s 36 states, its website said.

The blurred lines between Shoprite outlets and several malls that house them across the country appeared to have contributed to the misunderstanding. Many Nigerians population use Shoprite interchangeably with a mall.

Most of the shops being looted and destroyed, including two in Lagos, were owned and operated by Nigerians. Shoprite and other South African businesses, including MTN, have Nigerian investors and majority Nigerian employees. MTN has also announced a closure of all its outlets across Nigeria indefinitely.