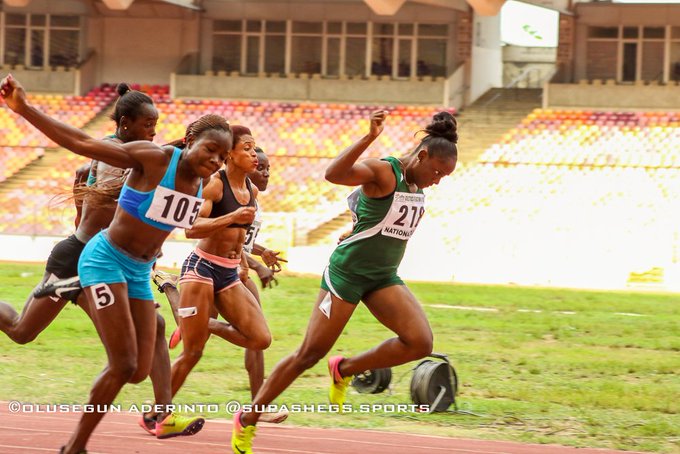 The 2019 Nigerian Athletics Championships in Kaduna has produced new champions across various fields, especially in the sprint races.

The duo of Usheoritse Itsekiri and Joy Udo-Gabriel emerged tops in the men and women 100m races respectively in the championship doubling as the National Trials for the African Games billed for Morocco next month.

Itsekiri came to the championship in Kaduna with the fastest time of 10.07s, which he set earlier in the season to qualify for the World Championships in Doha.

Though he could not produce the best of races, his finish time of 10.23s was good enough for the first position. Enoch Adegoke finished close 2nd with a time of 10.25s.

For the women’s race, Udo-Gabriel was way ahead of her rivals with her winning time of 11.58s.

Itsekiri extended his dominance to the 200m where he won the final with a time of 20.97s.

Favour Ofili ran the fastest time across in the women’s 200m finals, beating Amarachukwu Obi to win Heat 2 with a time of 23.35s. Udo-Gabriel was second fastest overall, winning Heat 4 with a Season’s Best (SB) of 24.08s.

Patience Okon-George led from start to finish to win the women’s 400m, thus claiming her fourth National title in the process.

In the women’s final, Comfort James won her first 800m National title, racing to victory in a time of 2:15.03.

It was a similar development in the women’s 100m Hurdles where Kemi Francis sailed past Grace Ayemoba to win in a time of 14.02s.

The men’s 400m Hurdles final was tactically won by Timothy Emoghene with a new PB of 50.45s, thus qualifying for next month’s African Games in Morocco.

Nigeria’s long-distance running couple, Emmanuel Gyang and Deborah Pam, dominated the 5000m, with the husband winning the men’s category in 14:54.71 while the wife won in the women’s race in 17:14.41.

He won with a new PB of 2.12m, which also secures his qualification for the African Games.

In the men’s Long Jump, Joseph Edafiadhe leapt to victory in the event, winning with a mark of 7.54m. In the women’s event, Precious Okoronkwo left it till her last jump to snatch the victory, winning with a leap of 6.05m.

Queen Obisesan won the National title in women’s Hammer, snatching the win with a throw of 65.19m.