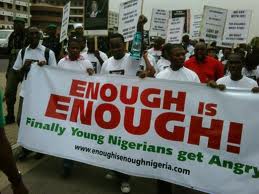 The Federal Government has thrown a heavy security cordon around Abuja, the nation’s capital, ahead of Monday’s nationwide strike declared by organised labour, and the continuation of civil society-led protests over the sudden cut in fuel subsidy.

Our correspondent reports that security has been heightened around the presidential villa, military and police installations, and major government buildings in the capital, including the Federal Secretariat in the Central Business District.

Several major roads in the city have been blocked by police and military officers, and fully armed security operatives were seen diverting traffic to alternative routines, causing severe traffic bottlenecks in some intersections and foisting hardship on motorists and commuters.

The Eagle Square, the number one open-air event centre in the capital, where massive protests held last week, and its vicinity, have been cordoned off with police tapes, pick-up vans and armoured personnel carriers. It is unlikely that protesters would be allowed access to the venue tomorrow.

Access to the square was blocked right from the Police Headquarters end of the Shehu Shagari Way, with security operatives in full riot gear standing guard. Armoured personnel carriers were then stationed on strategic points along the route all the way to the Federal Secretariat Complex and Office of the Head of the Civil Service of the Federation. Special police barriers have been erected on the roads leading to those important government buildings.

Movements are also being restrained on the roads around the army, air force and naval headquarters in the Area 8, Garki, part of the capital. The Moshood Abiola Road, which leads to the army, air force and naval headquarters as well as to the Old Parade Ground, has been blocked with bricks and pick-up vans. So also are the adjoining Tafawa Balewa and Muhammadu Buhari roads.

Security has also been heightened around the headquarters of the State Security Service, Nigeria’s secret police. One of the two lanes of the well-paved Aso Drive, which passes in front of the SSS headquarters, has been blocked, and closed entirely to traffic, except for those of officials entering the complex.

Security officials, who pleaded anonymity because they were not authorised to speak on the matter, said the security beef-up was principally because of the threat posed to the country by the extremist Boko Haram sect.

“We have to take precautions because Boko Haram can strike at anytime,” one of them said. “We don’t want to be caught unaware. And as you know hoodlums might want to hijack the protest. We have to be battle ready.”

Meanwhile, motor parks in Abuja are deserted with transporters complaining of poor patronage. Premium Times observed at Jabi and Utako motor parks that only a handful of intra-city buses were loading passengers. Commuters appear to have rescheduled their travels till after the strike.

House stays with the people, reverses removal of subsidy