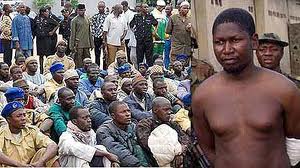 The manager of the Mubi branch of Diamond Bank is among the 20 people killed yesterday when the extremist Boko Haram sect launched a surprise attack on on the town.

The manager, whose name was given as Kingsley, was shot dead alongside his driver as he was returning from a condolence visit to the family of a customer who had died a few days earlier. A source in Mubi said Kingsley was heading back to his office when gunmen, who had laid ambush, suddenly appeared, shooting sporadically. The banker and his driver, our source said, were killed instantly.

The attackers however did not stop there. They marched on killing other innocent people, including 16 mourners who were attending an Igbo meeting to plan how the remains of some other of their colleagues killed in another attack the previous day would be transported home for burial.

A few others were mowed down at a local hotel in the town.

Although witnesses said no fewer than 20 people were shot dead in the daring attack, the Adamawa State Police Commissioner, Aderenle Shinaba, told Premium Times reports made available to him suggested that the number of victims could not have been more than between 10 and 12.

“I will only be able to give you full details about the exact number of casualty when I get to Mubi and undertake an assessment of the situation myself,” the police commissioner assured.

However, a source in Yola said four of the casualties were killed in an unnamed hotel in the town while a group of young people, mostly Igbo traders, were killed the previous day by unknown gunmen at Yelwa area of the town near the new market.

Residents said since the spate of killings by Boko Haram began in the town, government had increased its security presence in the area, with a high number of military men regularly patrolling the streets to forestall further attacks.

It was gathered that though normalcy has since returned to the town in the wake of the killings, an atmosphere of uneasy calm reigns among the residents in the area, who fear the consequence of reprisal attacks by Ndigbos, who, warned early this week against any attack of their relatives by the Boko Haram in any part of the Northern states.