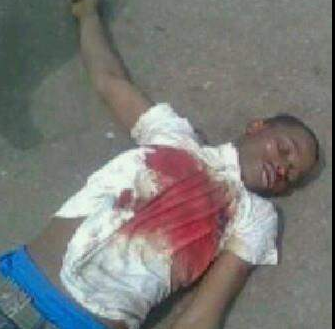 The Inspector General of Police, Hafiz Ringim, has just sensationally claimed that 23-year-old Muyideen Mustapha, who died during a protest against the withdrawal of fuel subsidy in Ilorin on Tuesday, was killed by feuding butchers.

Addressing journalists after a meeting of the nation’s top security chiefs at the police headquarters in Abuja, Mr. Ringim exonerated his men of complicity in the death of the protester, saying Mr. Mustapha got caught in a fight by some butchers, who he said killed him

The police boss said he was in possession of a medical report which indicates that the 23-year-old did not die of bullet wounds.

He said he was ready to make the report public whenever he is pushed to do so.

But the father of the late protester,  Alhaji Oke-Odo, has insisted that his son died of bullet wounds.

Speaking yesterday in Ilorin, Mr. Oke-Odo, explained that the family confirmed that at the University of Ilorin Teaching Hospital.

He said it was a “blatant lie, a glaring lie” that his son was stabbed by anyone.

He demanded that the culprit be brought to justice to serve as a deterrent to others.

Mr. Mustapha is the first casualty of of the ongoing national uprising against the sudden cut in petrol subsidy.

Since protests erupted across the country, the police has brutally cracked down on protesters, firing teargas and live ammunition at them.

Faces of subsidy protests across the country