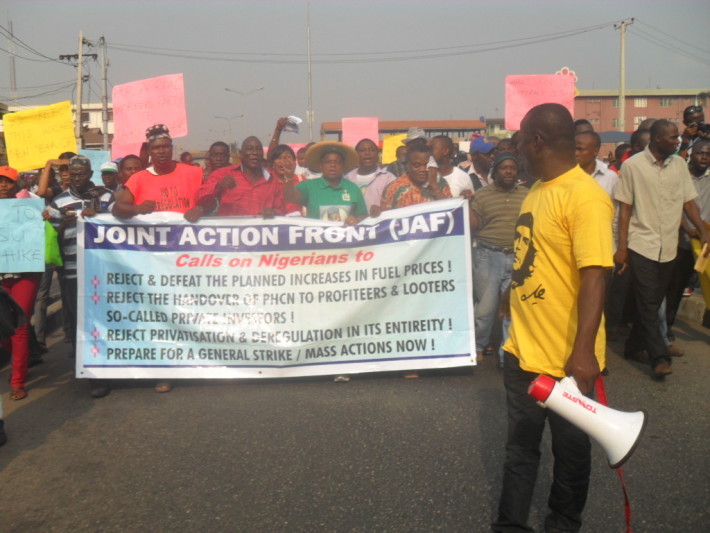 The protesters say they will fight government to a standstill

Protesters on Tuesday brought vehicular and other activities in Lagos to a standstill as they marched for more than four hours demanding the reversal of the removed fuel subsidy by the federal government.

The protest, organized by the Joint Action Force (JAF), the pro-Labour Civil Society component of the Labour and Civil Society Coalition, began at the Nigeria Labour Congress’ Secretariat at Yaba at about 9 a.m.

The procession went through Ojuelegba road, where some filling stations were forcefully shut down, before turning into the ever busy Ikorodu expressway.

The relatively peaceful march terminated at the Gani Fawehinmi Park at Ojota, where the organizers addressed the crowd charging them to “ensure that the barricades and bonfires continue.”

The march began with tens of members of the civil society and other groups and then swelled into hundreds as the procession gathered momentum.

At the Fadeyi part of the Ikorodu road, protesters sat on the deserted expressway and voiced their frustration at the exponentially high cost of transportation as a result of the announcement of the removal of the subsidy.

“The purpose of this rally is to show that the Nigerian people have rejected and will continue to reject the cruel imposition of the increase in the intolerable and unjustified increase in the price of petrol by the government of President Jonathan,” said Dipo Fashina, JAF’s National President.

“The people of Nigeria will resist all other cruel policies of selling out Nigeria and punishing the Nigerian people for the benefit of a few and their foreign masters,” Mr. Fashina added.

The music of one of Fela’s evergreen songs, Authority Stealing blared from a nearby loudspeaker and the crowd danced and chanted along: “…Catch am catch am, thief thief thief….”

The crowd also displayed placards to express their discontent with the present government.

‘Goodluck has become badluck;’ ‘Nigerians are not happy;’ ‘Impeach Jonathan and Sambo now;’ Who are the cabals? Jonathan, Iweala, OBJ, Barth Nnaji, David Mark;’ ‘Oshiomhole is a traitor, Iweala is IMF agent, Sanusi is a confusionist, Diezani is a rogue;’ ‘How long will the poor sacrifice for the rich?’ were boldly inscribed on some of the placards.

There were pockets of violent demonstrations but which the protesters struggled and successfully brought under control.

At an Oando filling station at Itire road, Surulere, where fuel was being sold at N140 per litre, one of the protesters forcefully overturned metallic racks bearing gallons of motor oil.

At the Anthony area of the Ikorodu road, area boys forced passengers in a BRT bus to alight.

Vehicles were ordered to make U-turn at the expressway or take a different route.

Three disinterested police officers in a Toyota Hilux van were dared to come down with their guns. They stayed motionless.

Two youth were arrested by the police after they were alleged to have smashed the mirror of a BRT bus and disposed passengers of their valuables at Onipanu bus stop, along Ikorodu expressway.

Some of the protesters claimed to have witnessed the assault and identified the culprits for the police. Bonfire and barricades were set up at different locations on the expressway.

Armed police officers stationed at Maryland junction looked helpless as the procession stopped to rest, chanting solidarity songs at the top of their voices.

One of the police officers, clutching an Ak 47 rifle was speaking into his mobile phone. “This is from Ikeja Division. The people have been here for about 10 minutes now… I’m giving you situation report,” he said and nodded his head vigorously.

They were asked to leave since the protest had been without violence. They acquiesced, smiling.

One of them grumbled to his colleague about having to pay N700 to come to their Ikeja station from his home at Igando.

At the Gani Fawehinmi Park at Ojota, where a statue of the late activist looked on, grim faced, the procession terminated and the organizers addressed the crowd.

“We want to restore confidence in Nigerians that you can win if you fight. The message we are giving here today must be carried far and wide,” said Abiodun Aremu, JAF’s secretary.

Mr. Aremu cited the late Fawehinmi and Beko Ransome Kuti as some of those who had lost their lives fighting government’s oppressive policies against the masses.

“Their deaths are not deaths that are natural. Their deaths were on the account of the struggle that they have waged. And for those of us living, we’ll be failing in our responsibilities to allow this price increase to stay,” said Mr. Aremu.

More than 20 anti-riot policemen also arrived at the park and watched from afar. “We must make the government to understand that some few people in Aso Rock cannot determine the fate of Nigerians,” said Mr. Aremu. “Without sacrifices, there can never be freedom. Every society that has enjoyed a measure of freedom is a function of the struggle that they have waged.”