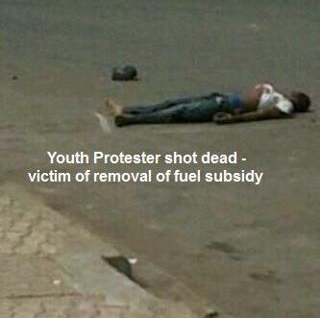 The second day of mass protest against the removal of fuel subsidy and hike in petrol price ended on a bloody note in Ilorin, Kwara State, as government security agents openly shot at protesters.

One of the victims of police brutality, who was shot around the post office area in central Ilorin, died instantly.

But, the leadership of the NLC President, Abdulwahed Omar, said President Goodluck Jonathan administration should be held liable for the death of the victim, urging it to find out and punish the killers.

The NLC President said: “It is with a heavy heart that the Nigeria Labour Congress (NLC) announces the murder of an anti-fuel price hike protester, who was shot dead by the police today, Tuesday 3rd January, 2012.

“The perpetrators of this crime were armed policemen from the Area A Division, close to UBA Ilorin and the State Police Command along Sulu Gambari Road, Ilorin.

“The NLC had cautioned the Jonathan administration against the use of brute force and arms against unarmed Nigerians who protest publicly their rejection of its murderous policy of hiking fuel prices by between 120 and 200 per cent.

Notwithstanding the protests, the Presidency on Monday went ahead to set up a committee headed by the retired Chief Justice of the Federation, Alfa Belgore, to dialogue with organized Labour.

But, Mr. Omar dismissed the action as “an afterthought meant to give Nigerians the impression that the government wants to consult with Nigerians.”

He said: “The attacks on peaceful demonstrators, the arrests in Abuja and the murder of a protester by the police do not portray a government that is interested in dialogue and peaceful negotiations.”

On the Christopher Kolade Committee on Subsidy Reinvestment and Empowerment Programme, Labour said it is seeking legal opinion on the constitutionality of spending public funds without appropriation by the National Assembly.