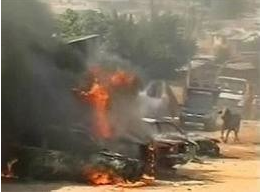 The Police Public Relations Officer (PPRO), Charles Muka, who briefed newsmen on Wednesday in Asaba, said that the incident occurred at about 9.40 p.m. on Tuesday.

Mr. Muka said that the locally made explosive was thrown by unidentified persons from a moving Camry car.

“Six children and one adult, who were injured by the explosive, are currently in the hospital in Sapele. Though no arrest has been made, we are trailing the group to nip them in the bud,” he said.

He said that some of the explosives that were not detonated were recovered, adding that the police would join forces with other security agencies and vigilance groups to fish out the persons responsible.

Muka said that the yuletide was relatively crime free in the state aside from the explosion in Sapele.

He pledged the command’s commitment to checkmate the criminals.

The spokesman assured the public that the police would redouble their effort in ensuring that the New Year celebration was also crime free.

All tears for Sunday Bada