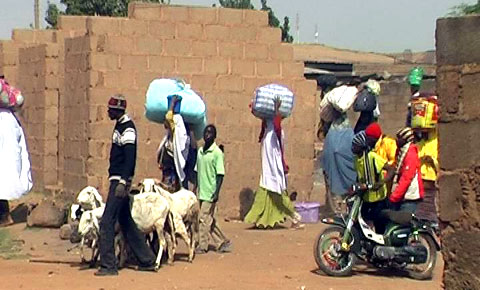 The lingering violence in Jos has shot up housing costs in the Southern part of the city, the News Agency of Nigeria (NAN) reports.

NAN correspondents, who went round some parts of the city, report that rents had skyrocketed in many settlements in the South as more people were relocating there from the crises-prone northern part.

NAN discovered that the situation was worse with shops for which rents had more than doubled in many locations in the South in the past few months.

Ezekiel Panmun, a landlord at Rantya Low Cost, located in the South of Jos, told NAN that the estate agents usually suggest the increments.

“They (agents) knock my doors everyday and want to know if there are vacant rooms. Where there is, they will always reject the amount you require. Normally, they can assure you of a customer for any amount they suggest,” he said.

Joseph Dangbai, a teacher, however blamed the landlords for the rising rents in the South of Jos.

“Sometimes, it has to do with the attitudes of some landlords; some of them are just greedy and very exorbitant in their charges for such flats. In some cases, the charges are not only high, but prospective tenants forced to pay for two years. The situation is worsened by the rush. If you delay even a bit, someone else is too willing to pay,” he said.

NAN reports that most residents, depending on their religious beliefs, see places like Angul-Dee, Ray-field, Hwolshe, Anglo Jos, Kufang and Dadin Kowa as ‘safe heavens’.

Other settlements considered safe include Rantya, New Abuja, Sabon Barkin, Bukuru Low Cost, Zarmaganda, among others.
Joy Dachung, a civil servant, said she had to flee the Northern part of Jos metropolis because it was ‘always crisis-prone’.

“Nobody wants to be caught up in any crisis considering the lives lost to the crisis in Jos for the past 10 years. No one will blame the people for rushing to New Abuja. Everyone wants a place that is free from attacks,” she said.

Garba Abdulrazak, a commercial motorcycle rider, said that rent in his area, Farin-Gada quarters, was on the downward trend.

“A room in our area now goes for N1, 200 per month unlike the N2, 400 some landlords were charging two years back. Some of the tenants have shifted bases, while some have relocated to other states as a result of the security problems we are facing,” he said.

NAN reports that continuous attacks on some locations in the Northern parts of Jos had seen traders also moving to areas considered suitable for investments.