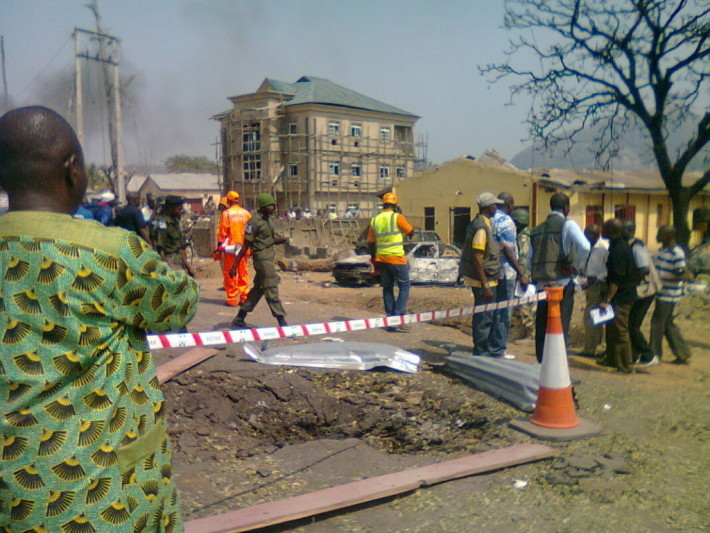 It was a harvest of bombs and deaths in Nigeria today

No fewer than 16 persons were bombed to death, and 27 others severely injured, as Christmas Day mass was underway at St. Theresa Catholic Church, Madalla, Niger State.

Several injured victims were rushed to different hospitals in the outskirts of the town even as tension remain high, with residents apprehensive there might be reprisal attacks by relatives of victims

The dreaded extremist sect, Boko Haram, has claimed responsibility for the attack.

The blast occurred almost simultaneously with two others in different locations in Yobe and Plateau States.

Premium Times gathered that the blast in Madalla occurred at about 8.15 a.m. when the Christmas Day mass was almost ending.

“We were inside the church for the Eucharistic mass service,” Oscar Ezra, a member of the church told our reporter. “The service was coming to an end when we heard a loud blast at the car park outside the premises that produced a huge fire and a thick smoke that covered the whole place.”

Mr. Ezra said he personally counted at least 25 badly burnt bodies and others in body bags evacuated from the scene of the blast.

Officials of the National Emergency Management Agency (NEMA), later arrived the church and evacuated the dead and wounded  to hospitals in Gwagwlada, Suleja and Zuba, a few kilometers from the area as well as Abuja, about 40 kilometres away.

NEMA spokesperson, Yushau Shuaibu, who confirmed the completion of the rescue operation  a while ago, said 16 people died in the incident, while 27 others suffered various degrees of injuries and had been admitted at the National Hospital, Abuja. 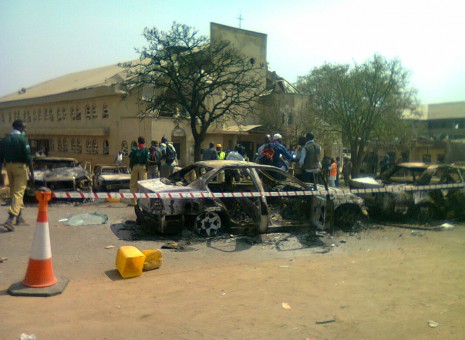 A witness blamed the number of casualties on delayed and slow rescue operation, as none of the security agencies got to the scene early enough. Nearby  hospitals also lack the capacity to handle emergency situations of that magnitude.

A crater  resulted outside the church, while several house adjoining the premises were shaken down to their foundations.  We counted at least 15 cars burnt beyond recognition.

It was gathered that the suicide bomber had driven to the entrance of the church with a suspicious luggage. The security men at the gate reportedly denied him entry. He left, only for his car to explode  outside the premises minutes after.

One of the burnt cars, parked beside the one suspected to have conveyed the detonated explosives reportedly had a family of five inside. They were said to have arrived the church for the next service when the bomber struck. All the occupants of the car were burnt to death. The only survivor of the family, who gave her name as Chidinma, said she was alive because she didn’t ride in the family car to church.

Two men, suspected to be Boko Haram members, were apprehended on the premises and handed over to the police. One of the suspects, who gave his name simply as Ismaili, said he was from Kamba village in Kano state. He denied any wrongdoing.

It is the second deadly incident on a Christmas day in a year, as a similar incident last year in Jos left almost 100 people dead.

The Pope Benedict has condemned the blast, describing it as blind, absurd “terrorist violence” that inflames hate.

Although the military has since taken over the security of the area, tension is palpable in Madalla and the adjoining town of Suleja, as fears are openly expressed among residents that tempers might flare, triggering a confrontation between Christians and Moslems in the area.

Meanwhile, another blast occurred in Damaturu, the Yobe State capital, involving a suicide bomber who ran a car laden with explosives into the convoy of the Joint Task Force.

Four JTF operatives were reportedly killed during the attack,  which occurred at about mid day outside the States Security Service’s (SSS) headquarters in the area.

It was gathered that the attack was a retaliatory action by the sect to avenge the killing of its members following last Wednesday’s military operation during which the military authorities killed at least 50 members of the group.

Yet another explosion also occurred at the regional headquarters of the Mountain of Fire and Miracles Ministry in central Jos.

It was gathered that a police officer lost his life when two men shot at the police check point in the area.

Two others suspected to be members of the killer group were later found in hiding in a nearby building, armed with locally made explosives.

Government beefs up security around Abuja