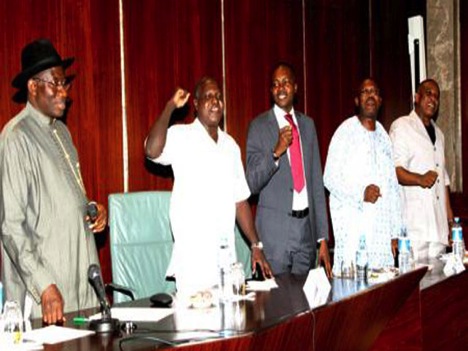 A meeting held last night between organised labour and the presidency ended in bitterness as President Goodluck Jonathan and his team failed in their bid to persuade labour leaders to back the proposal to cut subsidy from the pump prices of petroleum products.

The meeting, chaired by President Goodluck Jonathan, also had in attendance Vice President Namadi Sambo, Finance Minister, Ngozi Okonjo-Iweala, who doubles as the coordinating minister for the economy, and Petroleum Minister, Diezani Alison-Madueke.

Top officials of the Nigeria Labour Congress (NLC) and the Trade Union Congress (TUC) represented labour at the meeting.

The statement also quoted the Federal Government’s team as admitting that all Nigerians benefit from fuel subsidy but that the policy has been more to the advantage of the rich.

President Jonathan’s team, labour further revealed, also claimed that the current N65 per litre price was so cheap that it encourages smuggling of PMS across the country’s borders.

To further persuade labour to back the policy, the presidency presented a document, Subsidy Reinvestment and Empowerment Programme (SURE), which listed projects government would execute with savings made from the cut in subsidy.

But the federal government’s argument cut no ice with labour.

Messrs Lakemfa and Kolawole said in their joint statement that labour’s position at the meeting was that some of the figures presented by Mrs. Okonjo-Iweala were cobbled together to reach false conclusions.

It noted that the presidency’s presentation was simply a repetition of the presentations made by the Babangida and Abacha regimes and the Obasanjo administration and that none of the promises made were kept.

The unions, the statement further said, also argued that out of the projected N1.134 trillion to be saved from subsidy removal, N202.23billion would go to local governments, with the states reaping N411.03billion.

The labour delegation insisted that with non oil-producing nations refining petroleum products, a big oil-producing country like Nigeria had no excuse to be import-dependent.

It further lambasted the government delegation, saying government’s basic responsibilities to the populace was to make life easy and comfortable for them, and not to implement tough, externally-driven policies such as the Structural Adjustment Programme prescribed by the IMF under the Babangida regime.

The unions told government that its opposition to fuel subsidy removal is driven by its belief that the people must come first on all policies.

The statement added,” the NLC and TUC expect that the presidency will not remove fuel subsidy until it concludes the consultations with all stakeholders including Labour. Also, labour is of the firm opinion that given the high level of insecurity in the country, the hardship Nigerians are facing and deepening poverty, the removal of fuel subsidy will be injurious to the citizens and the country.”

It is known whether the presidency would meet with labour again on the matter.

President Jonathan’s spokesperson, Reuben Abati, could not be reached for comment on labour’s narration of the events at the meeting. Several calls to his two mobile telephones failed to connect. He is yet to respond to a text message sent to him on the matter

Court grants order for prosecution of customs boss for forgery