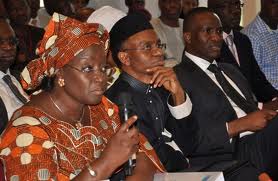 The senate has demanded the sack of Bolanle Onagoruwa, Director General of the Bureau of Public Enterprise, for “gross incompetence.”

The senate made the demand on Tuesday after it adopted – wholly – the recommendations of its panel that investigated the sale of government businesses through its privatization scheme in the last decade.

The panel, in its 172-page report submitted to the senate on last month indicted Ms Onagoruwa for “gross incompetence” in the management of the Bureau. The panel also said her role in the sale of federal government’s five percent residual shares in Eleme Petrochemical Company limited is “illegal and fraudulent.”

“She should be relieved of her duty,” the senate said. “The management of BPE should be reorganized to make it effective and efficient.”

Ms Onagoruwa is the fourth head of the enterprise which has sold 196 government companies in deals the investigative panel say was largely marred by presidential favouritism and corruption.

Under hand deals in sale of government companies by the enterprise, the senate said, is not limited to Ms Onagoruwa alone.

The senate is also asking the National Council on Privatisation to reprimand past heads of the enterprise.  Nasir El-Rufai, a former chairman of the bureau, Julius Bala, and Irene Nkechi Chigbue, his

successors in that order are recommended for reprimand – for seeking sale approvals directly from the president instead of the National Council on Privatization.

“Julius Bala should be investigated by anti-graft agencies for giving approval to Folio Communications Limited for the illegal sale of assets of Daily Times Nigeria Plc,” the senate added.

The then president, Olusegun Obasanjo, and his vice-president, Atiku Abubakar, who approved the deals are not to be punished for any misconduct. There is not even a slap on the wrist.

Rather, the senate merely advised, “presidential interference in the privatization process should be avoided in future.”

The senate adopted the panel’s entire report and its recommendations, making far reaching economic demands on the privatised businesses.

The senate demanded that the NCP should rescind the sales of ten privatised public enterprises including Nigeria’s topmost five star hotels; Sheraton, Trancorp Hilton and Nicon Luxury hotels for non-performance.

The sale of Aluminium Smelting Company of Nigeria Plc (ALSCON), Daily Times of Nigeria, and Delta Steel Company which were sold to different private investors also irked the senate which directed they should be rescinded.

The investigating panel said that its investigations revealed that there were inadequate transparency and failure to comply with privatisation procedure in the sale of these public enterprises.

“The sales and concession of some of enterprises and the process was marred by political interference and injustice,” the report said.

Housing estate should be rescinded.

“Their monies (should) be returned back to them,” the senate said.