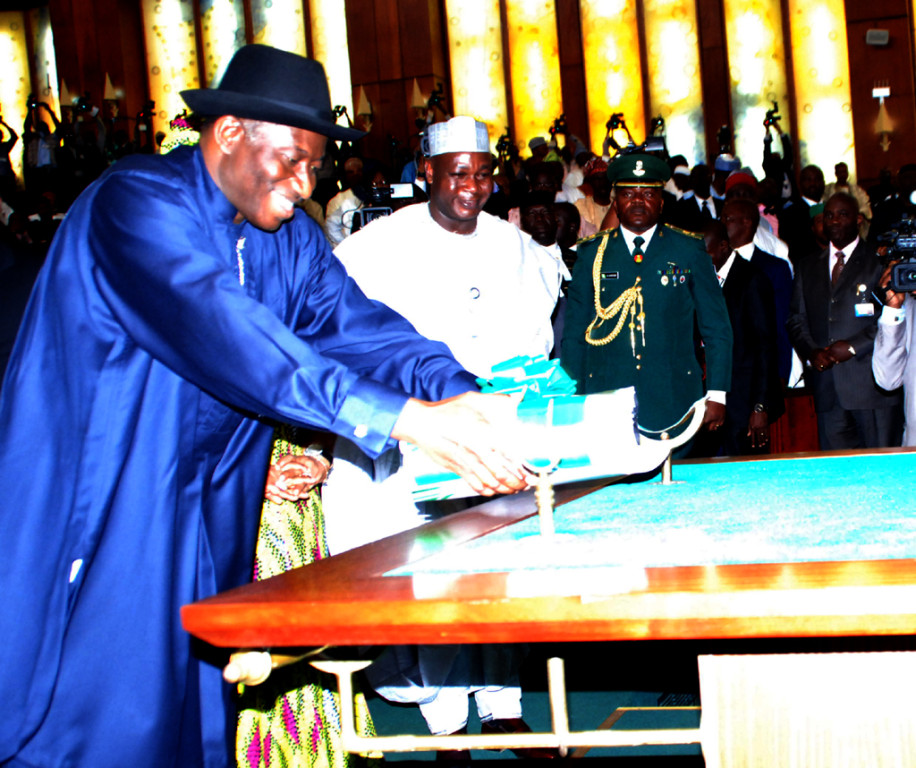 Presentation of the 2012 Budget to the Joint Session of Legislators at the National Assembly in Abuja on Tuesday. Photo by Saeed Sanusi

Although there is a percentage drop in the proposed expenditure on recurrent for 2012 within the context of the entire budget – which is six percent larger than 2011’s – the actual figures reveals a contrary rise in the recurrent expenditure for 2012.

According to the president’s proposal, 2012 recurrent expenses will gulp 72 percent of the total budget of N4.749 trillion which equals N3.41928 trillion.

Comparatively, the percentile is down but the actual amount to be spent on recurrent expenditure in 2012 did not go downwards; rather, it will be higher than what was spent in 2011 by N82.32 billion.

In as much as Paul Nwabuikwu, spokesman of the Finance Minister, agrees with the observation, he says there is nothing wrong with the president’s logic.

“The percentage is more important than the actual figure,” Mr. Nwabuikwu argued.

Recurrent expenditure has been the bane of Nigeria’s budgeting system since 1999 and usually sucks up funds meant for projects like road, rail and house construction, power projects and other capital projects that will grow the economy.

Last year, the senate president, David Mark, announced the national assembly was taking an overhead expenditure cut to free up funds for capital projects and challenged the executive to do the same.

Analysts say the president, perhaps chose to use percentages, which made the recurrent expenditure appear to have diminished a little, to please the national assembly leadership who have been demanding cuts in executive overhead expenditures.

“It is our hope and sincere belief that this budget will challenge us; and to take the challenge we must tighten our belts,” the senate president had said in his speech delivered early at the budget presentation event.

“To do so we must ensure that all sectors and every Nigerian irrespective of position or status is involved,” he added, alluding to the executive who were yet to take a position on cutting recurrent expenses.

“The president had himself said the aggregate expenditure proposed for the 2012 fiscal year is N4.749 trillion, which is six percent higher than the N4.484 trillion appropriated for 2011, so he shouldn’t expect Nigerians to buy his decrease in recurrent expenditure argument hook line and sinker!” an analyst said.

“More so, we have just had salary increases, the lawmakers and politicians still earn huge amounts and political appointees still live larger than life on government overheads. How will the recurrent expenditure be down with all that?” another analyst added.

The capital expenditure, however, received genuine improvement. Yet, experts – including lawmakers – are sceptical about its implementation.

“Over the years, we have listened to very beautiful and impressive budget speeches eloquently delivered in this chamber” the senate president. “Unfortunately, the implementation has not matched the words as economic policies often lack continuity and projects are needlessly discarded or abandoned.”

ECOWAS forges ahead with Sealink project