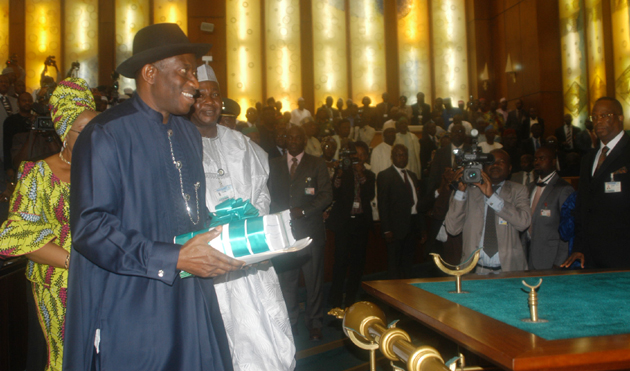 President Goodluck Jonathan about to lay the 2012 Budget during the Presentation of the Budget to the Joint session of legislators at the National Assembly in Abuja on Tuesday... Photo: Saeed Sanusi

President Goodluck Jonathan evaded the thorny fuel subsidy controversy in his 2012 budget address before a joint session of the National Assembly Tuesday, shocking lawmakers at a ceremony that was marked by scathing criticisms of past budget implementation.

In his first full-fledge spending plan, as well as address to the lawmakers since winning a fresh term in April, the president announced a N4.749 trillion budget, just six percent above the 2011 budget, with a deficit of about N1.2 trillion.

The focus of the plan, the president said, is saving more money for infrastructures that would create jobs, improving national security in the face of growing internal threats, and in the same breath, consolidating an economic structure that can demonstrate stability.

While depending mainly on oil revenues to fund the budget, a greater drive will aim at non-oil income too, the president said. That will be based on 2.48 million barrels of oil per day as well as a modest $70 per barrel.

In a speech that lasted nearly an hour, the president detailed a list of his administration’s targets from the oil sector, but carefully avoided any mention of the controversial removal of fuel subsidy, surprising lawmakers that expected a firsthand confirmation or denial of the proposal.

Femi Gbajabiamila, who represents Lagos state, said the decision may have been “tactical” since the president could not be certain of the response to expect.

“But we will take time and look at the budget and we will fish  out the government’s position on the subsidy wherever it is,” Mr. Gbajabiamila said.

However, preliminary details of the budget suggest the subsidy funding might be cut with effect from 2012 as speculated.

But the ceremony represented a rare opportunity for lawmakers who have always derided the executive for late submission and a dreadful,  at best, selective implementation of the budgets each year. And the legislators put that concern to the president today.

In his opening speech, the Senate president, David Mark, said the nation had witnessed several “great, and eloquently delivered” budgets that were never fully executed.

Striking the same note, the speaker of the House of Representatives, Aminu Tambuwal, told the president that the “sheer number of uncompleted and mostly abandoned projects and programmes in this country boggles the mind.

“It is the single most obvious sign of shoddy government implementation of the national budget over the years.” He warned that “selective budget implementation has no place in our constitution.”

As both remarks were made, the president, who met the legislators in the company of Vice President Namadi Sambo, and other members of the executive council, sat calmly with a grin, his hands clasped.

His speech drew fits of what seemed more like forced ovation at intervals, while Mr. Tambuwal’s acerbic remarks were enormously applauded by mostly members of the house.

In a way, it highlighted the dissatisfaction that has come to be known with annual budget failures. The lawmakers have said the implementation level of the 2011 budget, like past years, remained less than 50 percent.

However, Mr. Jonathan said in his speech that as of November, utilization of the fund releases – which the government uses as a percentile gauge for the execution – had reached 67 percent, and was expected to rise to 70 percent by December 31.

He said that was “fair” and blamed the shortage on the 2011 elections, subsequent inauguration of a new administration and the passage of the 2011 amendment budget in May 2011.

For 2012, the president said, gross federally collectible revenue is projected at N9.406trillion, of which the total revenue available for the Federal Government’s Budget is forecast at N3.644 trillion, representing an increase of 9 over the estimate for 2011.

The lion’s share of the plan is to finance security with N921bn, followed by education at N400bn.

Jonathan has something to hide – Chido Onumah