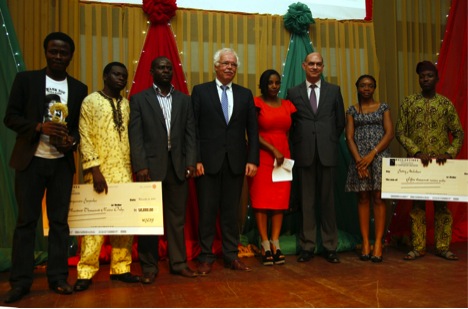 Seven Nigerian journalists on Friday night stood tall as they were awarded prizes for outstanding reporting at this year’s award ceremony of the Wole Soyinka Centre for Investigative Journalism (WSCIJ).

NEXT newspapers came out tops, producing five out of the seven recipients.

Motunrayo Alaka, the co-ordinator of the WSCIJ, in a press statement earlier today, said Idris Akinbajo of NEXT was declared the WSCIJ-Nigerian Investigative Journalist of the year 2011 while Adeparusi Oluyinka of National Mirror won the first prize in the photo category with his picture captioned – Corporal Punishment lingers. His PUNCH newspaper counterpart, Sodiq Adelakun was adjudged runner-up for his picture captioned – Electricity at all cost.

The Climate Change category which had no winner due to, as explained by the judges, the poor quality of works submitted, had a runner-up, Adejuwon Soyinka of Tell Magazine who got the prize with his entry; Sitting on gunpowder.

A six-part series team entry, The Oil Minister Series/Diezani Chronicle, written by Elor Nkereuwem, Peter Nkanga, Idris Akinbajo and Musikilu Mojeed of Next Newspapers took the lead in the print category. The runner-up position in this category went to Nicholas Ibekwe of the same newspaper for his story – The Pfizer Series.

Following the Centre’s tradition of best standards, the judges found no work suitable for award in the radio, television, local government and gender issues categories.

Two individuals were given honorary awards at the ceremony. The Lifetime Award for Journalistic Excellence, was presented to Lanre Idowu, Managing Director, Diamond Publications while the Anti-corruption Defender award was received on behalf of Justice Kayode Eso by his son, Olumide.

In her opening speech the Centre Coordinator, Motunrayo Alaka lamented the crises in the Nigerian media and called on credible Nigerians with means to join the programme sponsors, the Netherlands Embassy, in supporting the Centre financially and otherwise to enable it maximise its potentials.

Although this year’s winners are unlikely to enjoy the opportunity of a sponsored international training abroad which started with the 2010 winners, they went home with the award plaque, a cash prize of N100, 000, a laptop and six-month free internet access.