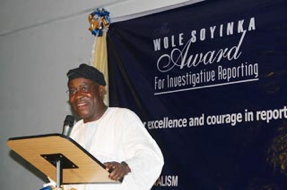 Nigeria gets network for investigative journalists

Mr. Dapo Olorunyomi, the executive director of the Centre opened the meeting by sharing a short history of the Centre, explaining that in the course of its work especially in award making the Centre realised a need to continuously support, strengthen and empower the Nigerian media. According to him, the creation of a network which the Centre hopes will stimulate the reproduction of investigative journalists in the country is one of the organisation’s efforts to meet these needs.

Following Mr. Olorunyomi’s remarks, the British Deputy High Commissioner, Mr. Peter West in his speech mentioned that to ensure that the people’s hopes are not lost after the May elections, investigative journalists in the country have a role to play in keeping leadership honest and accountable.

During her keynote address, Ms. Margaret Renn, a veteran investigative journalist and senior fellow with the University of the Witwatersrand, Johannesburg, South Africa, charged participants to bear in mind that investigative journalism is not only about uncovering inept activities of the rich and mighty in the society. In her words ‘stories about ordinary people qualify as investigative reporting’.

Ms. Renn emphasized that investigative journalism should be encouraged as a force for good. According to her, public opinion can be changed when the media refuses to be a vehicle for the endless recycling and quotation of press conferences and official statements.

In agreement with the keynote speaker, discussants at the workshop; Mr. Theophilus Abbah, Ms. Ibiba DonPedro and Mr. Musikilu Mojeed who all added their dimensions as practising investigative journalists in Nigeria, highlighted the importance of investigative journalism to the Nigerian society with testimonies of published stories that have helped set agendas for positive change in the country.

The break-out session allowed contributions from all participants and was highly engaging as it focused on the needs assessment for the network and the structure required to ensure it remains functional and sustainable.

The workshop which was held with funding support from the British High Commission ended with the formal inauguration of the Nigerian Investigative Journalism Network (NIJN) by Ms. Margaret Renn.