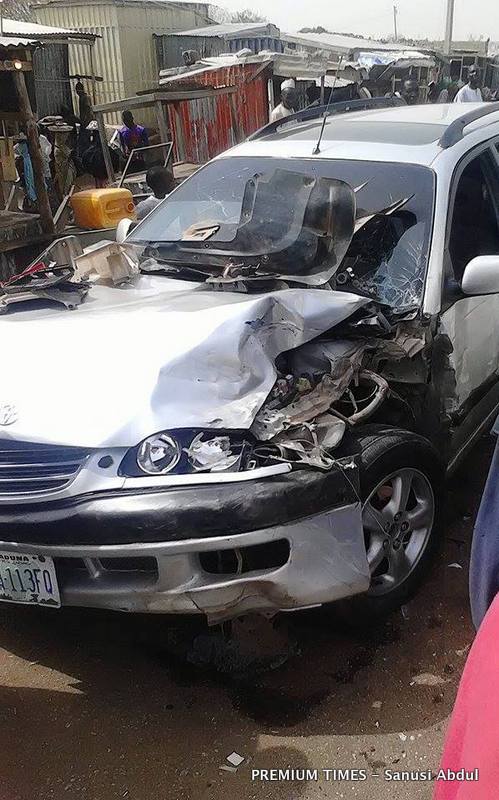 A car crash scene used to illustrate the story

Five members of the All Progressives Congress (APC) were confirmed dead in a ghastly motor accident a few meters to Oke-Onigbin, a Kwara State suburb, on the Omu-Aran-Ilorin highway on Sunday.

The News Agency of Nigeria (NAN) gathered that the APC members and some party executives of Irepodun Local Government Area of the state were on their way to Oro for a rally.

It was gathered that the rally in Oro, the hometown of the Minister of Information and Culture, Lai Mohammed, was meant to celebrate the outcome of Saturday’s bye-election won by the party’s candidate, Raheem Olawuyi.

The vehicles conveying the party members, a Nissan Previa with registration number BU 383 ABJ and Mazda 323 number FKJ 169 AN, were said to have had a head-on collision with a Nissan Murano Jeep marked KJA 905 CV at about 4:30 pm.

One of the party members was said to have died instantly following the impact of the crash while others were rushed to Adeyemo and Ajisafe hospitals in Omu-Aran.

The other four victims were said to have died in the hospital while those who sustained injuries, among them the party’s Chairman in the council, Hon. Yemi Aransiola, were being treated.

An eyewitness, Kunle Azeez, said the driver of the jeep survived.

Mr Azeez told NAN that the jeep had overtaken a trailer while on top speed before the head-on-collision with the cars conveying the party members.

A NAN correspondent, who visited the hospitals on Monday, reports that the party stalwarts were seen making frantic efforts to receive the corpse of the victims for burial at their respective communities.

Mr Tyia Asagun, an official of the Federal Road Safety Commission, Omu-Aran Unit Command, who claimed to have coordinated the accident rescue efforts, told NAN that the cause of the accident was still being investigated.

He, however, said that over speeding and dangerous driving were suspected to have played major roles in the accident.

Mr Asagun said the command, after the rescue efforts, had handed over the accident case to Oke-Onigbin Police Division located a few meters from the accident scene.

Femi Davids, the spokesperson to Mr Olawuyi, described the incident as “shocking and unfortunate.’’