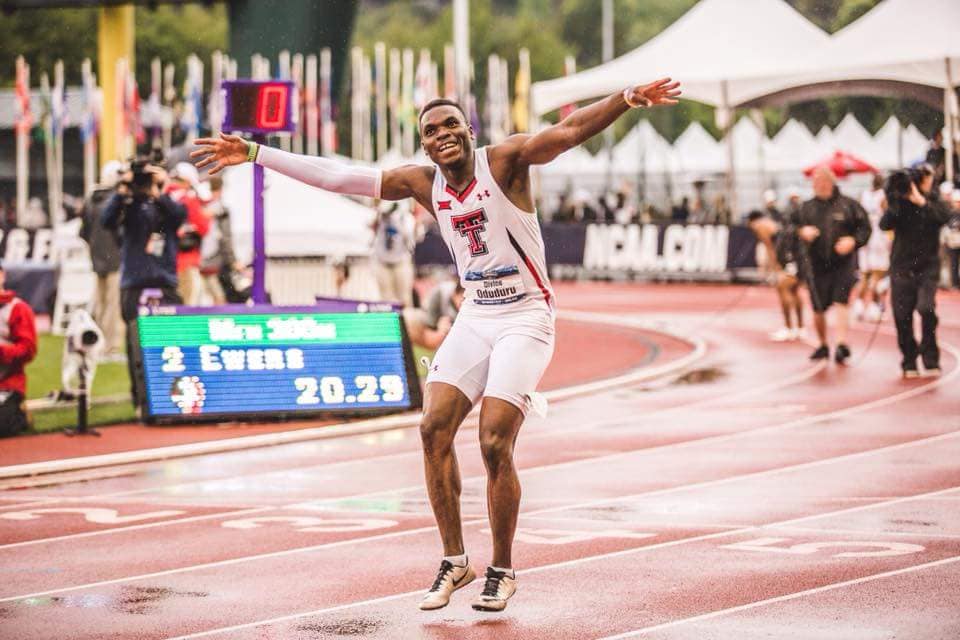 The future looks bright for athletics in Nigeria and one of those giving the reason for such optimism is Divine Oduduru who, early Saturday, won his first National Collegiate Athletic Association (NCAA) title.

The NCAA organises national championship among tertiary institutions in the United States and has helped launch many to stardom.

Despite running from lane 8, Oduduru braved all odds to win the men’s 200m final with a time of 20.28s at Hayward Field, Eugene.

He secured the win for his school Texas Tech, winning by a one-hundredth of a second. Florida State’s Andre Ewer was 2nd in 20.29s, while Kendal Williams finished 3rd in 20.32s

Oduduru has now joined the elite list of Nigerian athletes to win NCAA titles, a feat achieved by the likes of Blessing Okagbare and most recently by Oluwatobiloba Amusan who won the women’s 100m Hurdles in 2017.

Oduduru did admit he was lucky to make the final, however he was encouraged remembering the good memories of competing at the Eugene stadium in 2014, when he won Silver at the World Junior Championships.

“So that was part of my encouragement, and I encouraged myself, and I beat myself up and said okay it’s time to go. I just had to do what I have been doing at practice and I got the result,” Oduduru added.

On what inspired his special dance on realizing he had won the title he said: “I told God, ‘if you make me win this race, I’m going to dance a dance that shows that I’m grateful to you.”

Oduduru is the first Texas Tech athlete ever to win a 200m National Title.

Fayose taunts Obasanjo, says he should submit himself to Buhari’s probe

Most Nigerians have slipped into extreme poverty — ActionAid