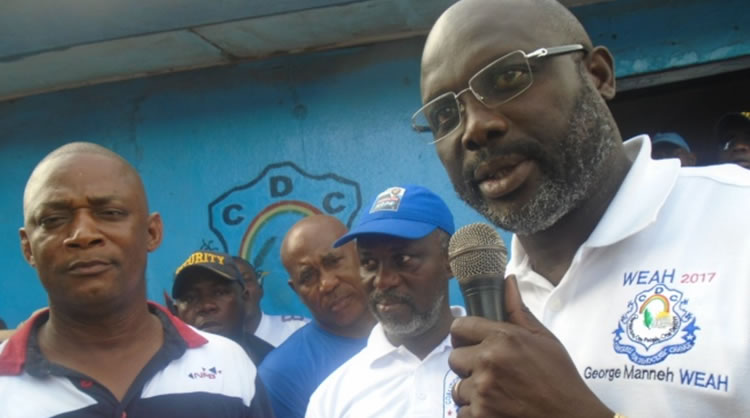 With 98.1 percent of results from the polling units, George Weah, a former football star and the candidate of the opposition Coalition for Democratic Change (CDC), has scored an unassailable lead in the Liberian presidential run-off election.

In results announced on Thursday by the chairperson of the country’s electoral Commission, Jerome Kokoya, Mr. Weah scored 720,023 votes which is 61.5 percent of the total votes so far collated and counted.

He has effectively been elected president of the west African nation.

The incumbent vice president and candidate of the Unity Party, Joseph Boakai, scored 451,088, which is 38.5 percent of the vote cast.

Mr Jerome, during a press conference attended by the head of the Economic Commission of West African State (ECOWAS) observer team and former president of neighbouring Ghana, John Mahama, said results for the remaining two percent of the vote will be announced on Friday.

Meanwhile, the ruling UP has summoned its top officials to an emergency meeting on Friday.

The party has also invited all political parties that partnered with it in the run-up to the election to the meeting slated to be held at its national headquarters in Congo Town, at 11 am.

A statement by the party’s spokesperson, Mo Ali, explained that the party’s candidate and incumbent vice president will also be available at the meeting.

Though Mr. Ali did not say why the meeting was summoned, it is believed that the result announced by the commission will be the subject of the discussion.