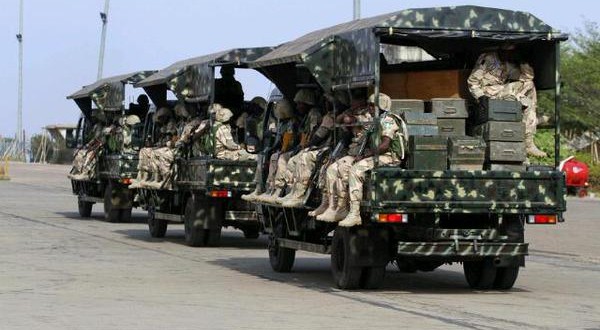 At least one police officer and a Borno State government truck driver were confirmed dead on Tuesday night after gunmen believed to be Boko Haram fighters ambushed a large convoy of travellers being escorted by armed soldiers, officials said.

The ambush, at about 10 a.m. on Tuesday, was on a large convoy of commercial, private and government vehicles travelling from Maiduguri to the southern part of Borno State, passing through the Damboa road.

Armed escort of soldiers is often required to travel through the recently reopened Maiduguri-Biu federal highway.

The road, which also has a link to the gates of Sambisa forest, had been closed for about two years after Boko Haram captured towns and villages along its axis. It was only opened for commercial motorists in February 2016.

But since its opening, Boko Haram gunmen have staged several attacks on vehicles plying the road.

The latest of such attacks was that of Tuesday morning, which occurred at Abbari-Dalwa village located about 30km from Maiduguri, the Borno State capital.

Hours after the attack, news began to filter into Maiduguri that about 8 police officers and several civilian travellers may have been killed by the terrorists.

Authorities at the various security outfits in Borno State were, however, not forthcoming with information on what actually transpired.

About 10 hours after the attack, the Borno State Police Command at a press conference at about 8 p.m. confirmed the daring assault.

The Borno State Police Commissioner, Damian Chukwu, informed journalists that only one of his officers died in the ambush that also claimed the life of a Borno State government truck driver conveying drugs to an IDP camp in Damboa.

He said a unit of soldiers who normally carry out such exercise once in a day was escorting the convoy of over 200 vehicles.

He also explained that in the convoy were 63 personnel of the Nigeria Mobile Police Force on a special duty in Askira-Uba Local Government Area in southern Borno State.

He also said a team of police officials from the state command were also conveying the corpse of a police sergeant who died of natural causes about four days ago, to the same local government area.

Mr. Chukwu explained that due to the increasing demand for more police presence especially in the liberated areas of Borno State, his command made a request for more hands, and the Inspector General of Police okayed the demand.

“It was based on that approval by the IG that one officer and 62 men of the Nigeria Police Mobile Force were deployed from Delta State to Askira,” he said.

“And the vehicle conveying the deployed unit who were in an 80-sitter bus, had to join the convoy of civilian travellers being escorted by the soldiers.

“They started the trip around 10 a.m.; and by 11.30 we received information that they were ambushed. Suspected insurgents who were firing anti-aircraft rifle on the bus conveying the policemen ambushed the whole convoy of about 200 vehicles. They had to scamper for safety and in that process six of them were injured.

“The rest 56 of our special deployment managed to escape without any injury and their guns were intact.

“But from what we gathered, the Borno State government driver who was driving the policemen left the vehicle and ran away. The gunmen attempted to take the bus away, but later left it after ridding it with bullets.”

Mr. Chukwu said the deceased police officer was one of those escorting a corpse.

“The story is not the same with our men that are in the burial party.

“The driver (of the ambulance) was shot and injured, but a sergeant, Bala Tiiseh, who was escorting on the front of the lorry was killed. One Mustapha Modu, a driver of Borno State government’s truck, was killed.

“There are lots of other civilian occupants of the lorry, comprising relatives, friends and well-wishers of the deceased, who are still missing in action.

“We learnt that in that attack, there was a stampede; people ran in different directions for safety.”

Earlier, PREMIUM TIMES had gathered from some of the surviving police officers who returned to Maiduguri that the Boko Haram gunmen carted away a FNC rifle, a police lorry, as well as military, commercial and privately-owned vehicles.

The police commissioner did not, however, confirm the loss of equipment and vehicles.

The military has not issued any statement on the incident and its spokespersons in Borno did not pick or return calls.

Reports from some of the attacked police officers, however, suggest that the soldiers too may have suffered casualty in the attack.

Tuesday’s daring attack by the Boko Haram on such a well-protected convoy occurs two weeks after the insurgents attacked Maiduguri in a coordinated move.

The insurgents, who have lost most of the territory they once controlled to soldiers, have thus shown they are still able to carry out coordinated attacks. The Boko Haram insurgency has caused about 100,000 deaths, mainly in Adamawa, Borno, and Yobe states, since 2009.

Another batch of 175 Nigerians return from Libya