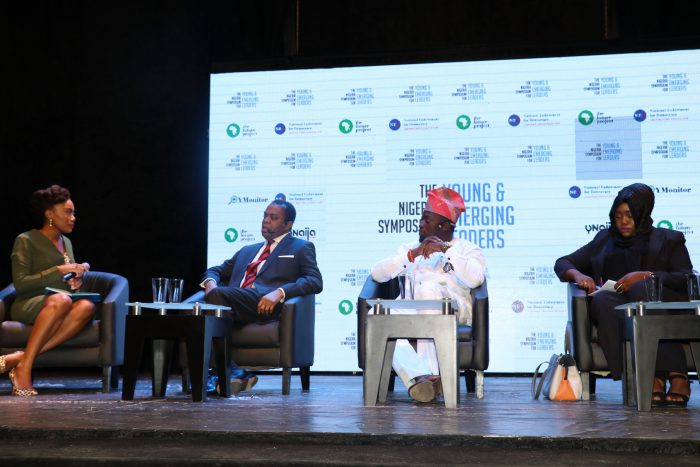 A former governor of Cross River State, Donald Duke, has called on young Nigerians to participate actively in governance and seek leadership positions, noting that there is usually a disconnect when elderly persons are leading a mostly young society, such as in Nigeria.

Mr. Duke was speaking at The Nigeria Symposium for Young and Emerging Leaders organized by The Future Project in Lagos with the theme ‘Open Governance: Improving Transparency and Accountability in Government.’

“There’s actually a disequilibrium when you have a young society such as ours and you have folks who are way past the average age in the country; there is disconnect,” he said.

“And that was typical of (Olusegun) Obasanjo’s first term as elected president, he was totally disconnected from the reality of Nigeria. He went back to 1979, the folks whom he knew, brought them into government. Folks like Adamu Ciroma… those were his colleagues, at that point, they were all grandfathers.

“The disconnect was so apparent that anything that didn’t sound like the norm…like building a road from Point a to B… I remember trying to explain to a minister how to use a cell phone, it was that basic. Now how does that gentleman relate to the rest of the country?

“If you look at nations that have taken great leaps, not necessarily that the head of the institution must be a young person but he must relate to the average age of the society.

Mr. Duke, who served as governor between 1999 and 2007, narrated some of his experiences as a young politician.

“I’d just been elected governor, I accompanied President Olusegun Obasanjo to Cuba, and met with Fidel Castro,” he recalled.

“I was 36 going to 37. And he (Castro) took a hard look at me and asked Obasanjo if it was the policy of the Nigerian government to move college students to Government houses. That took me unawares. When I got a grip of myself, I asked him at what age did he turn the world upside down, what age was your Cuban revolution, he said he was 29, and he apologized to me.

“The reason I cited this is simple, you will only make a difference in the prime of your life. And leadership is not going to be handed over to you as an award, you’ve got to demand it. You see, far too often, we behave as if we are tenants in this country, we are all co-owners. For as long as you are up to the legal age, as long as you’re that age where you can vote for others, correspondingly, you are entitled to be voted for.

“Kennedy was 42 or so when he became president and he could dream of going to the moon. Eisenhower was president before him but that dream was too elusive. Kennedy said by the turn of the decade, by 1970, America will land a man on the moon and bring him back. Not because it was easy, but because it was hard and he knew he had time on his side, you see the difference.

“The internet was started by the Clinton administration, between Clinton and Al-Gore, they came into office at the age of 46 and by 54 they had served two terms. There is virtue in youth, once the youth is schooled right, and you know you have longevity on your side.

“You won’t really ask a 74-year-old man to start aspiring to put a man on the moon, he’s gonna be looking at the basics, the basics are right we should underline that. But society is aspirational, so we want to do what we ought to do today but know that there is a brighter future tomorrow.”