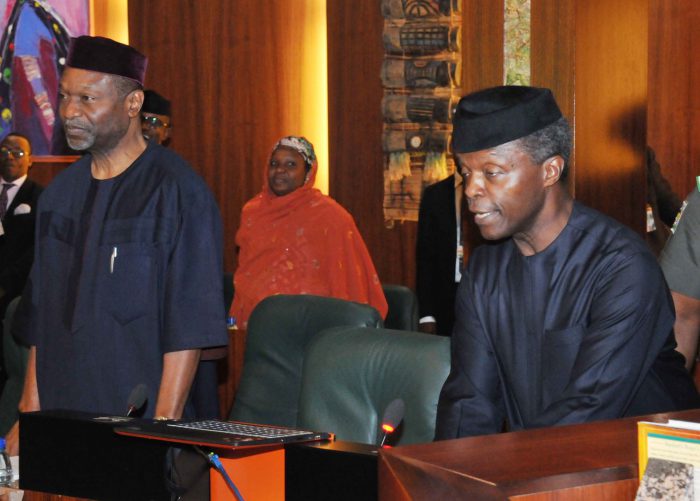 You are a system stabilizer, 36 Governors tell Acting President Osinbajo

Nigeria’s 36 state governors were on Thursday full of praises for Acting President Yemi Osinbajo, describing him as a system stabilizer.

A statement by the spokesperson for the Acting President, Laolu Akande, said the governors made the remarks while making a presentation at today’s National Executive Committee meeting.

“In a presentation by the Governors, the Acting President was told “this nation is very stable because of the role you play. God bless you our Acting President, thank you very much”.

“The Council then prayed that God Almighty should give the Acting President more strength to carry out the task of national re-engineering.”

Imo State Governor, Rochas Okorocha, confirmed that governors and other members of NEC commended the leadership style of Mr. Osinbajo.

NEC, an official economic platform for dialogue among the 36 state governors, the governor of Central Bank of Nigeria (CBN), and other co-opted members, is chaired by the Vice-President.

Addressing State House correspondents on the outcome of the NEC meeting, Mr. Okorocha said members of the Council were impressed by the way and manner Mr. Osinbajo was handling the affairs of the country.

“But the highlight of the whole discussion today was a special commendation the Council made on the Acting President of the Federal Republic of Nigeria who we have all resolved to call a “System Stabiliser”.

“For the mere fact that Mr President (Muhammmadu Buhari) is on medical vacation, the system is still as smooth as it has always been.

“So, we commended the acting president for a job well done.’’

Mr. Okorocha, who disclosed that the Council discussed monetary issues concerning Nigeria’s economy, said the nation’s Excess Crude Account stood at 2.3 billion dollars as at May 24.

He said: “we were made to understand from the office of the Accountant-General that the excess crude account as at May 24 stands at 2.3 billion dollars’’.

“Council also reviewed the discrepancies in figures and we have said that the Accountant-General will look at it and at the next meeting he will brief the council appropriately.’’

On the budget support facility for state governments which would be terminated by the end of May, the governor said the Council expressed concern that this may affect the economies of the states negatively.

He said the Council resolved that the budgetary support be extended to enable state governments to meet some of their financial challenges.

“As regards the loan support called the budget support facility for states which is suppose to come to an end by the end of this month, council was concerned about the fact that we are gradually coming out of recession.’’

According to him, if this budgetary support ceases at the end of May, it may create some lapses in our bid to stabilise the economy.

“So council resolved that the budgetary support be extended to enable states catch up with the economic challenges of the moment,’’ he added.

He said the council noted with delight that the Forcados Terminal would soon commence crude oil production and this would subsequently help to stabilise the economy.

Below is full statement by Mr. Akande.

REPORT ON EXCESS CRUDE ACCOUNT BY ACCOUNTANT GENERAL OF THE FEDERATION

The Accountant General of the Federation presented to Council, an update on the Excess Crude Account

The Accountant General of the Federation informed Council that the current Budget Support Loan Facility will end in May 2017.

Council noted the concerns of States and directed the Minister of Finance to work out the modalities for the continuation of the programme.

At the end of today’s meeting, Governors lauded the Acting President.

– Members of the Council lauded the leadership qualities of the Acting President, describing him as the “System Stabilizer.”

In a presentation by the Governors, the Acting President was told “this nation is very stable because of the role you play. God bless you our Acting President, thank you very much”.

– The Council then prayed that God Almighty should give the Acting President more strength to carry out the task of national re-engineering.

The Report of the Committee was presented to Council by the Committee’s Chairman, Kaduna State Governor, Mallam Nasir El-Rufai

The Committee informed Council that the revised sharing formula of the Ecological Funds as modified is as follows:

That all States and Local Government Areas have got their share of the Ecological Fund, and that the only thing left is the Federal Government’s share of 1%

Of the 1% belonging to the FG, (which now stands at N33.6 billion) NEMA and Great Green Wall project are statutorily entitled to 20% and 15 % respectively.

Only 65% of the FG’s share is available for sharing

The report gave details of how the entire Ecological Fund has been utilized and noted that there is need to establish a clear criteria for sharing the 65% of the FG share among States of the Federation.

The Committee informed Council that 19 States plus Abuja are yet to benefit from the 1% of the share of the Ecological fund. These are Adamawa, Akwa-Ibom, Borno, Edo, Ekiti, Imo, Jigawa, Kano, Kwara, Lagos, Nasarawa, Niger, Ogun, Osun, Oyo, Rivers, Sokoto, Yobe, Zamfara, and FCT. Several other states had benefitted in the previous administration, in 2013, an action described as discriminatory.

Thirteen billion (N13 B) naira is now available for sharing to States, since N20 billion must be left in the account for unknown national emergencies.

Council applauded and appreciated the enormous and painstaking work the Committee has done, noting that it will await the final report of the Committee before taking decision.

On September 2016, the report of the Presidential Technical Committee on Land Reform (PTCLR) Tagged “The Land Use Act (LUA) draft Regulations” was presented to the Council

The Council constituted an Ad-hoc Committee comprising 7 Governors to review the regulations.

The Committee considered the report, and today presented its findings and recommendations to Council

Highlight of the report includes:

a. the need to introduce systematic land titling and registration throughout Nigeria

(b) radically increase the existing dismal volume of land registration in Nigeria.

(e) to optimize the socio-economic benefits of land to both the Government and the people.

Council thanked the Committee for the comprehensive report and directed the Committee to further reflect the views and concerns raised by States, especially as it has to do with mining rights and the role of States, Local Governments and Communities for onward submission to the Council of States for consideration

As the 2017 farming season enters its critical stage, the Minister of Agriculture, made a presentation, and charged Council to prevail on States Government to acquire more tractors, 100 at the very least per State to support the efforts of farmers in boosting food production in line with the Economic Recovery and Growth Plan.

He told Council that the Federal Ministry of Agriculture and Rural Development will continue to lend a helping hand to States Government in other areas of critical needs, including the provision of threshes, mini-harvesters, water pumps as well as the provision of loans at single-digit interest rate for farmers.

He informed Council that agriculture is still leading the path of GDP growth which stood at 3.5% in the second quarter of 2017, and that there is need to give greater impetus to agricultural production in order to speed up the country’s economic recovery.

Office of the Vice President

Why ‘Biafra’ should remain in Nigeria – Osinbajo