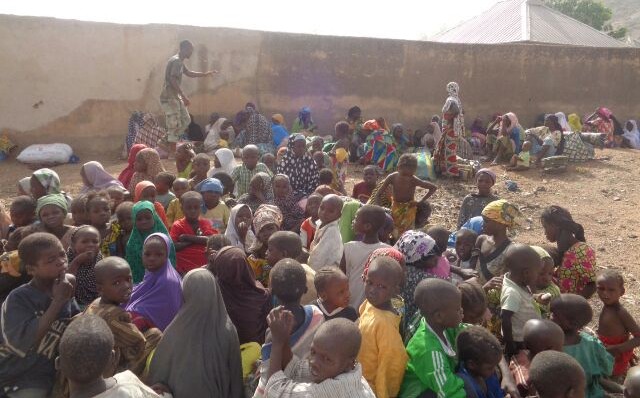 Children used to illustrate the story..

The Nigerian Army on Wednesday provided further details of how its gallant troops descended on and captured the dreaded Sambisa Forest from where the terrorist Boko Haram group had launched deadly attacks on Nigeria for years. SEE VIDEO BELOW POST.

Briefing journalists in Maiduguri, the Borno State capital, the Theatre Commander of Operation Lafiya Dole, Leo Irabor, a major general, said the operation was executed by a combination of ground attacks and air assaults on the location.

Mr. Irabor said, “Recall that during our last meeting, I told you to take particular note of Camp Zairo in Sambisa Forest. Our gallant troops of Operation LAFIYA DOLE have cleared the location which is the last stronghold of Boko Haram Terrorists (BHTs) deep inside Sambisa Forest.

“On 22 Dec 16 at about 0800hrs, own troops commenced advance for the capture of Camp Zairo which was the main Boko Haram Terrorists (BHT) enclave suspected to be holding high value persons in Sambisa Forest.

“The Air Component and Artillery were effectively employed during the operation before the final assault by the troops. Our troops made contact with the BHT and successfully cleared the camp after some resistance from the insurgents.

“On sighting of our troops and having been overpowered in the fire fight, most of the BHT fighters fled in all direction. The gallant troops subsequently carried out search for any abductees and equipment. Our troops also raided and destroyed other camps and hideouts around Camp Zairo. At the camp, our troops destroyed several BHT logistics as shown.

“The gallant troops also dismantled the official BHT flag at Camp Zairo signifying the capture of the insurgents’ headquarters. The flag would be officially presented to me by the GOC 7 Div. Later, same would be conveyed to Chief of Air Staff for further action to the C-in-C.

“During the operation in Sambisa, ISR coverage indicated that the BHT were in disarray.”

Mr. Irabor said before the final assault on Sambisa Forest, troops conducted some fighting patrols around the area.