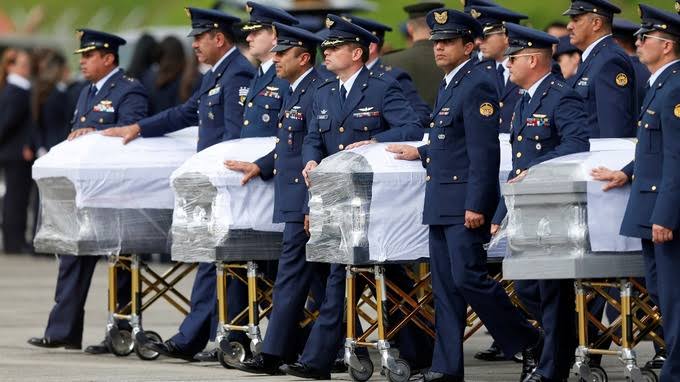 The victims of the Colombian air crash which killed 71 people including almost a football squad, arrived in Brazil on Saturday for a memorial.

The bodies left the airport in the Colombian city of Medellin on Friday and were accompanied by representatives of Colombia’s civil aviation authority, soldiers, police officers and rescue workers.

Among those killed were 19 first-team players from Brazilian football team Chapecoense.

The club will hold a stadium memorial service at its Arena Conda later on Saturday.

Heavy rain met the arrival of the plane carrying the coffins in Chapeco, the city where the team are based.

The coffins were draped in white cloth adorned with the team’s green logo and were carried from the aircraft by soldiers.

On Monday, the team’s chartered plane took off with 77 people aboard bound for the final of the Copa Sudamericana in Medellin.

The Lamia Air Avro RJ 85 crashed in hills close to Medellin after apparently running out of fuel.

The dead include 19 Chapecoense players, 24 team officials and their companions, 21 Brazilian journalists and seven Bolivian and Paraguayan flight crew members.

However, three players, two crew members and a journalist survived.

Rafael Henzel Valmorbida, 43, a reporter for Radio Oeste Capital, a station in the Brazilian city of Chapeco, where the team is based, survived the crash.

Report says among the Chapecoense players that survived, Neto remains in a critical condition, while Alan Ruschel underwent surgery for a spinal injury and Jakson Follmann’s right leg was amputated.

Brazil completed three days of national mourning for the victims on Friday. (dpa/NAN)