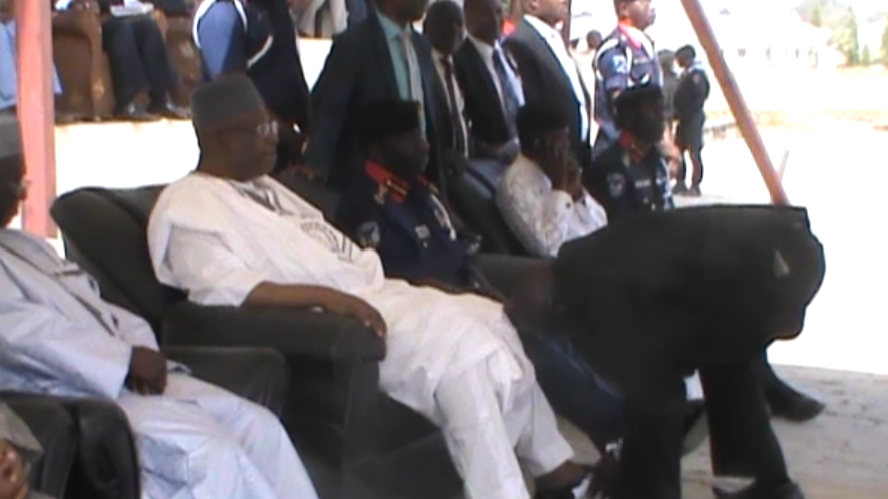 Nigeria’s Minister of Interior, Abdulrahman Dambazau, has been caught on tape using an officer of Nigeria’s secret police, the State Security Service, to clean his shoes in public.

A video sent to PREMIUM TIMES by one of its readers showed the minister, dressed in white gown, relaxing on a couch with his legs stretched out.

The SSS officer appeared from the sides, with a handkerchief in his right hand and a holstered service pistol protruding from his jacket.

He was shown stooping before the minister, using his left hand to lift Mr. Dambazau’s right leg, slightly above the floor to clean his loafers.

The minister bent his head to notice him, before looking away to focus on the event unfolding in a distance.

The minister was at the Nigeria Security and Civil Defence Corps Academy in an Abuja suburb for an event in December.

He was seated between what seemed to be top officers of the NSCDC who merely took short glances at the SSS officer stooping before them.

Soon, the right leg shoe was glistering again and he steadily dropped it back to a dusty floor.

The minister adjusted himself in his couch and gently raised the left foot, appearing detached, while the SSS officer took it in his palms again and wiped off the dust.

Top Nigerian officials are known for misusing or abusing security details posted to them.

Apparently irritated by the way security officials are treated by the VIPs to which they are attached, the Inspector General of Police, Solomon Arase, in May last year, warned police officers against running errands or doing domestic chores for their principals.

“You are police officers of the Federal Republic of Nigeria and they must respect you as such. Your uniform must be respected, anybody who wants to hire a domestic help should not use our policemen who are sent to protect them as domestic help.

“I have directed the commissioner of police in charge of the airports that if they find any of you carrying boxes (of VIPs) and rifles, and dragging them all over the place, they should arrest you and you will be punished.’’

It is not clear whether the SSS gave a similar instruction to its personnel.

EPL Round Up: Mikel escapes defeat with Chelsea as Leicester return to top spot