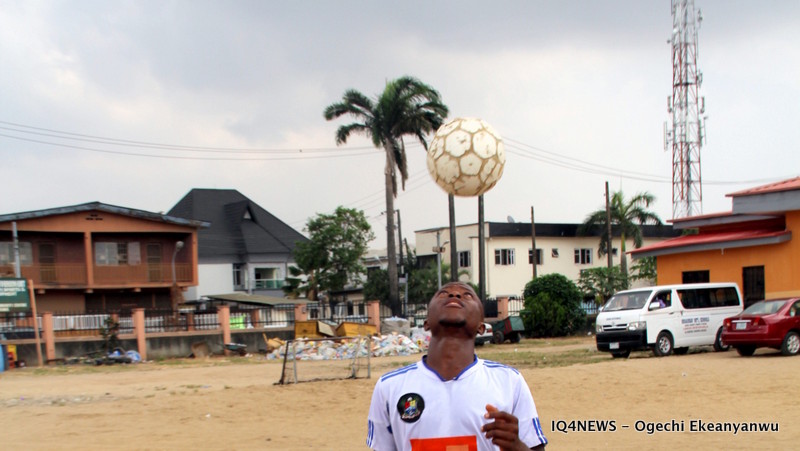 Among a group of about 30 young boys, some as young as 12, are Ebuka Ogbuehi and Joel Izeh from Lagos. They are about to board a boat at Calabar seaport in southeast Nigeria, going to neighbouring Cameroon. With them are two football coaches — one known to the boys as their coach, Emma (pronounced Ima) — along with a nurse, a dry cleaner and Mr Eric Fred Toumi: a football agent.

Some weeks before, all of the boys’ families paid Mr. Toumi N300,000 (US$1,500): the cost, he said, of enrolling them into his football academy in Cameroon where they will take part in trials for European clubs, while getting secondary school education.

“The agent was brought to our team by our coach [Emma]. When the man came the first time he picked those he would pick (sic) and he travelled [away].

“The second time when he came, that was when he picked me. So he asked us to pay some money.”

We contacted both the Italian and Croatian football federations. Neither organisation had Eric Toumi on their records.

The families of 30 young boys paid up believing their sons were about to become the next football sensations. They didn’t anticipate the suffering they would endure over the following twelve months.

The 1,149km journey from Lagos, Nigeria, to their football camp in Mbanga, a small town in western region of Cameroon, five hours from the capital Yaounde, took them almost three months.

Why? Because for the first two months, they were still in Lagos.

“We stopped at Badagry. We stayed at a friend’s place for about a couple of months before heading to Cameroon,” said Ebuka, who described how they slept on cardboard boxes during their stay.

At Calabar seaport, Joel recalls a woman warning the under 14s to “go back”.

“But we players are always eager,” he said.  They did not listen.

When the boys finally made it to Cameroon they were confronted by Cameroonian immigration. Some of the boys had no passports. But the agent, Joel says, came to “sort all those things out”.

Arriving at the camp, it was obvious to Ebuka that things were not quite what they were promised. For one thing, it was nothing like the luxury training facility they had expected.

Instead, it was “in the bush, it was nowhere. It was not encouraging”.

They shared toilets with the school next door.

At the camp were other boys, some from Benue, Cameroon and Congo. There were also other boys from their club in Lagos, who had arrived at Mbanga six months earlier.

They were shocked at the arrival of their teammates despite “calling our coach to tell us not to come,” Ebuka explained.

“They warned us that we shouldn’t come, that there is not good, but you know now people that are trying to make it in life will do anything; we are having faith (sic), hope that we would make it; stuff like that, so I had to go.”

Two days after their arrival, things looked promising. They travelled to a tournament in the coastal city, Limbe, in the southwest region of Cameroon.

But the boys did not fare well. They lost their matches because, Ebuka says, they had barely eaten that day. They were declared unfit by the agent, and returned to Mbanga for training.

Then, after two months, things changed.

“They don’t allow us to come out of the camp [and] we hardly feed (sic),” said Joel.

Eric Toumi was nowhere to be found.

“The cook there started complaining that he is not going to cook; that he hasn’t been paid up to six months salary. Even the previous cook came … he took all the pot (sic), everything,” adds Ebuka.

The young boys were left to fend for themselves, and resorted to begging at night, stealing corn, potatoes, yam and cassava from nearby farms in order to survive.

Meanwhile, unknown to Ebuka and Joel, Eric Toumi was still collecting money from their families back in Lagos. The overall payout from Ebuka’s family was well over N400,000 (US$2,000).

“People blame us,” adds Ebuka’s mum, Lovinia Ogbuehi. “You just give your children go Cameroon, who is this man? We don’t know him. That is why we didn’t go to the police, because people blame us.”

Next Page: The Bigger Picture >>>

How a football agent trafficked us abroad, ruined our dreams — Young Footballers