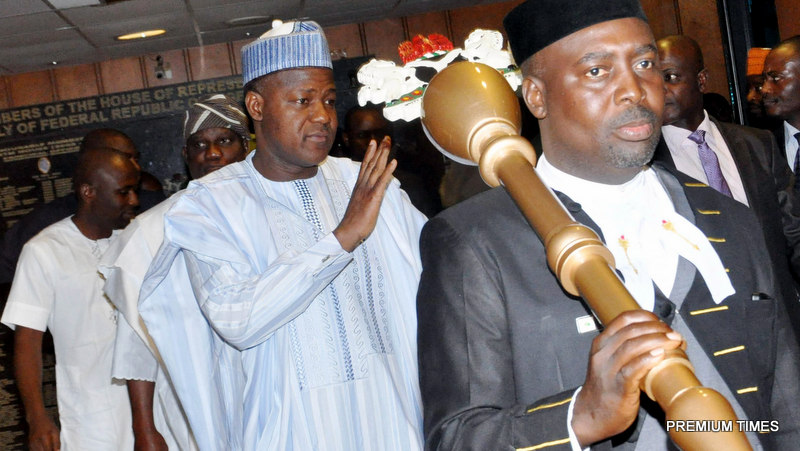 Members of the House of Representatives loyal to Speaker Yakubu Dogara on Saturday claimed a deal has been struck with the rival faction loyal to the leadership of the All Progressives Congress and Femi Gbajabiamila, saying the crisis in the lower legislative chamber is now officially over.

But the Gbajabiamila group immediately punctured the claim, saying no agreement has been reached, and that the so-called Dogara formula remained unacceptable to their camp.

The spokesperson of the Dogara group, Abdulmumini Jibrin, had earlier on Saturday addressed a press conference in Abuja saying an arrangement, known as the Dogara Formula, had been hammered out after extensive consultation.

Under the arrangement, which he said had been accepted by members of the two rival factions, the group loyal to Mr. Gabajabiamila would produce the House leader from the North West and Chief Whip from the South South.

Mr. Jibrin said the new formula had thrown up what is now known as “Equity Team”.

Mr. Jibrin said both the Speaker and a great majority of the APC caucus in the House, including “gladiators” in the Gbajabiamila’s group such as Messrs. Mongunu, Doguwa and Iriase support and stand by the Equity Team.

“We have commenced collection of signatures which has reached advanced stage to affirm the Dogara formula,” he said.

He also said all other interests, including those excluded from the principal officers, specifically Messrs Gbajabiamila and Mongunu, would be duly accommodated with “commensurate responsibility to serve”.

Since the Speaker has about 200 positions to share out, many members will have the opportunity to serve the country, the lawmaker said.

“In the light of this development, it is heart-warming to announce to you that the disagreement in the House, which many have erroneously labelled as crisis, has finally come to an end,” he said.

Mr. Jibrin said the Speaker’s camp worked out the new arrangement “in order to actualise the needed peace and unity in the Green Chamber so as to commence work for the Nigerian People and provide support for President, Muhammadu Buhari”.

“Let me reiterate our resolve that President Buhari is going to enjoy the maximum and unprecedented support of the APC caucus in the House in order for him to achieve all the laudable programmes of this government,” he said.

But shortly after Mr. Jibrin briefed the media, a member loyal to the APC and Mr. Gbajabiamila, Nasiru Zangon-Daura, circulated a statement on behalf of his group denying that any agreement had been reached.

“The APC loyalists group hereby deny and unequivocally reject any purported endorsement of a so-called formula on the APC leadership in the House of Representatives,” he said

Mr. Zangon-Daura said any member of the loyalist group who “claims to be part of this arrangement acts on his own and not on behalf of the group”.

The House of Representatives has remained stuck in crisis since its inauguration in early June over the appointment of other principal officers after Mr. Dogara emerged speaker against the wish of the leadership of the APC.

Several efforts have been made to find solution to the crisis and a couple of proposals were advanced.

Mr. Dogara’s proposal, which he forwarded to the national chairman of the APC, John Oyegun, is what Mr. Jibrin announced Saturday.

The Speaker had argued that since the North-East and South-West had produced Speaker and Deputy Speaker already, the remaining principal positions should go to the North-West, North-Central, South-South and South-East in the spirit of “equity, fairness, justice, a strong precedence and provision of the constitution”.