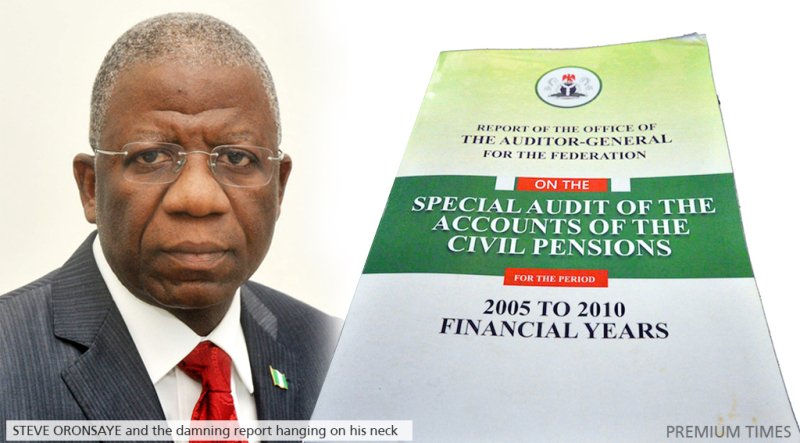 Steve Oronsaye and the damning report

A document before the Federal High Court in Abuja in the ongoing corruption trial of a former Head of Service, Stephen Oronsaye, has exposed the Auditor-General of the Federation, Samuel Ukura, as an auditor who lies and engages in cover ups to protect officials accused of graft.

PREMIUM TIMES had in September 2014 exposed a damning report by the Office of the Auditor-General detailing the alleged involvement of Mr. Oronsaye in a N123billion fraud when he served as head of service between 2009 and 2010.

According to the report, entitled “Special Audit of the Accounts of Civil Pension,” Mr. Oronsaye was alleged to have presided over the looting of public funds during his tenure.

However, shortly after the story was published, the Auditor-General circulated statements and bought spaces in some major Nigerian newspapers to disown the report produced by his own office.

In the advertorials, Mr. Ukura claimed there was no such report as cited by PREMIUM TIMES in its story.

To counter Mr. Ukura’s claim, PREMIUM TIMES, in a subsequent story, made public the executive summary of the report indicting Mr. Oronsaye.

This newspaper also challenged the Auditor-General, who was apparently under pressure from unknown quarters to disown the report, to explain why he refused to dispatch the report to the National Assembly two years after it was produced even though he was required by law to do so within 90 days.

But after months of deceit and cover ups, Mr. Ukura has now admitted to the Economic and Financial Crimes Commission that his office was indeed in possession of the report cited by this newspaper in its report.

The Auditor-General’s admission was contained in a June 25 letter to the EFCC.

“I hereby forward a certified copy of the “Report of the Auditor General for the Federation on the Special Audit of the Accounts of the Civil Pension for the period 2005 to 2010 Financial Years.

“This covers pages (1) one to (179) One hundred and seventy-nine as requested.

“A similar copy has already been forwarded to the National Assembly for their necessary action.

“Please accept the assurances of my highest regard.” 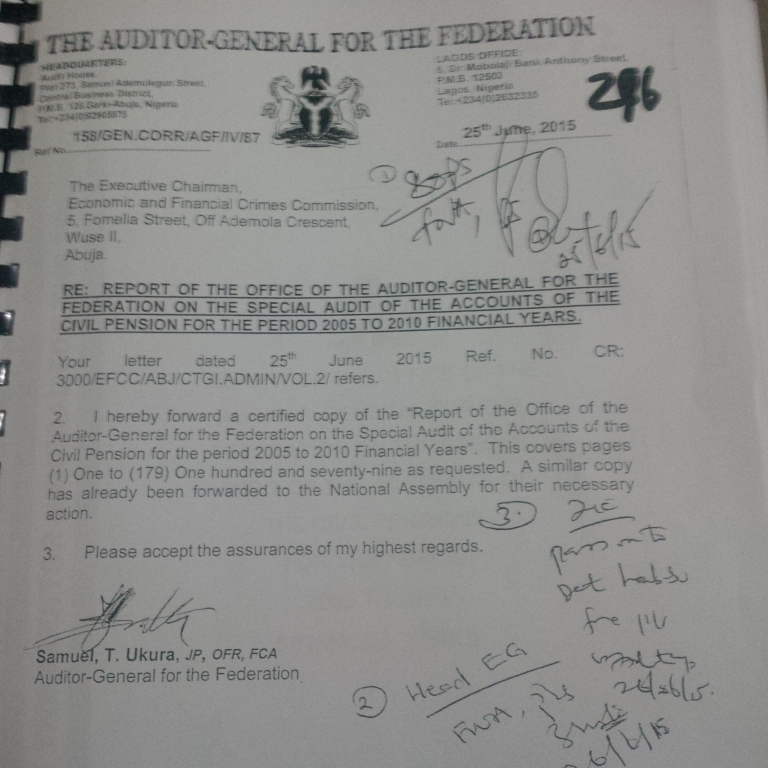 Mr. Ukura then attached and forwarded to the EFCC a Certified True Copy of a report he claimed didn’t exist.

The AGF’s letter and the audit report he forwarded to the EFCC has since been admitted by the Court as Exhibit 296 in the corruption case against Mr. Oronsaye.

The report, which the auditor-general tried hard to suppress, arose from the work of a Special Audit Team he personally constituted in May 2011 to conduct a comprehensive examination of the accounts of the Civilian Pension Department domiciled in the Office of the Head of the Civil Service of the Federation.

The audit, which covered the period 2005 -010, uncovered monumental financial irregularities, opaque transactions, irregular and abnormal running costs, and outright stealing and kick-backs at the Head of Service’s office, a trend said to have reached its zenith during the 18 months that Mr. Oronsaye served as Head of Service.

Although the auditors also uncovered financial irregularities during the tenure of his predecessors, the team found that it was during Mr. Oronsaye’s reign – between 2009 and 2010 – that the mismanagement of pension funds rose to an all-time high, with about N123billion of public funds unaccounted for.

Similarly, section 85(4) of the Constitution stipulate that the Auditor-General shall have power to conduct periodic checks on all Government statutory corporations, commissions, authorities, agencies, including all persons and bodies established by an act of the National Assembly. Furthermore, Section 301 vests the Auditor-General with the power to audit the account of Area Councils in the Federal Capital Territory.

In accordance to Section 85(5) of the 1999 Constitution, the Auditor-General shall, within 90 days of receipt of the Accountant General’s financial statement, submit his Report to each House of the National Assembly (The Senate and the House of Representatives) and each House shall cause the Report to be considered by a Committee of the House of the National assembly responsible for Public accounts.

Section 85(6) of the Constitution states that “in the exercise of his function under the Constitution, the Auditor-General shall not be subject to the direction or control of any other authority or person”.

But by yielding to external pressure to suppress, and then disown a report by his own office, this Auditor-General has shown that he is a spineless, unprofessional official unfit for the position he has been given, said Musikilu Mojeed, PREMIUM TIMES managing editor, while reacting to Mr. Ukura’s action in September 2014.

“These kinds of people are the reasons corruption is blossoming in this country,” Mr. Mojeed said. “He is a disgrace to his profession, to the department he heads and to this country whose progress is unfortunately being held down by monumental corruption.

“He should hide his face in shame because an Auditor-General who shields corruption is a present and permanent danger to his country, state or society.”